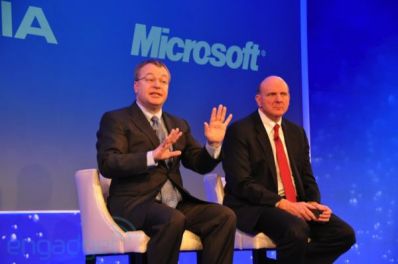 While many believe that Microsoft’s recent partnership with Nokia is a not-so-stealthy hint at an eventual takeover, Nokia CEO Stephen Elop (pictured right with Microsoft CEO Steve Ballmer) doesn’t agree, and sees no reason why Microsoft would choose to buy the company.

“I’m not aware of a strategic interest that Microsoft would have in the rest of the business,” Elop said to Reuters. “To the extent that a partnership has been formed around what they’re really interested in, then what would an acquisition bring other than a good year of anti-trust investigation, huge turmoil, delays?”

Elop has a point. By partnering with Nokia to be its flagship Windows Phone 7 device maker, Microsoft already has what it needs from Nokia without the headache of fixing its internal problems. And you can bet that European regulators wouldn’t have taken too kindly to Microsoft completely gobbling up one of Europe’s biggest companies.

Microsoft is reportedly paying Nokia $1 billion over five years to become a Windows Phone shop. Nokia will also pay Microsoft a fee for every copy of Windows on its phones (so basically, every phone). But Nokia will also be saving quite a bit of money that it otherwise would have been spending on software research and development.

Elop also confirmed that Nokia workers are currently hard at work at the company’s first Windows Phone devices. “If this was an acquisition scenario, that wouldn’t be possible,” he said.

Elop previously said he hopes to have a Windows Phone 7 device from Nokia out by the end of the year.