While it may not seem like it at first, Nokia’s Lumia 800 is one of the most significant smartphones on the horizon. It may lack the absurdly high-end specs of current Android superphones, and it doesn’t have the hype of Apple’s iPhone, but for Nokia and Microsoft, the Lumia 800 represents the viability of their joint mobile future.

I had a chance to test out a Lumia 800 for a few weeks, which made it all the more clear to me just how important this little phone will be.

Microsoft and Nokia, sitting in a tree

When the two companies announced earlier this year that Nokia was partnering with Microsoft to make Windows Phone 7 its primary mobile operating system, the initial response was mostly skeptical. At the time, Microsoft’s new mobile baby was just a few months old, and it was struggling with sales. Nokia, meanwhile, was still trying to shoehorn its aging Symbian operating system into touchscreen interfaces.

Even though Nokia never lost its knack for killer hardware, it was clear that the company needed a modern smartphone OS sooner rather than later. That meant the company couldn’t keep wasting time on MeeGo, its next-generation OS that was still years from completion. For Nokia, the union with Microsoft was born out of cold-hearted pragmatism — that much was clear from Nokia CEO Stephen Elop’s dramatic “burning platform” memo.

The fact that the Lumia 800 exists at all (along with its lesser sibling, the Lumia 710) is a sign that Microsoft and Nokia’s partnership is already paying off. It shows that Nokia is capable of humbling itself by wholeheartedly and quickly adopting Microsoft’s platform, and that Microsoft is fine with relaxing its typical restrictions on Windows Phones to make a truly unique product. (Microsoft is rumored to be paying Nokia over $1 billion to use Windows Phone.)

It’s also a significant feat that Nokia was able to announce and release the Lumia 800 in international markets before the end of the year, as the company previously hinted that its first Windows Phone may not be released until 2012.

A phone unlike the competition 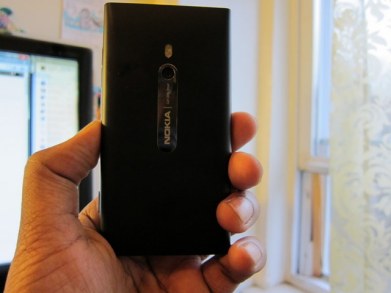 So now, some 10 months after that fateful announcement, we finally have the Lumia 800, the first fruit of Microsoft and Nokia’s union. It’s not as fast as many competing smartphones, and it’s missing some key features like a front-facing camera for video conferencing, but it’s still in many ways a high-end device that will turn heads.

For one, the Lumia 800 looks and feels completely unlike any phone on the market — except of course Nokia’s own N9, an experimental MeeGo phone that served as the launching point for the Lumia’s design. Its curved glass display makes the imagery from its eye-bleedingly sharp 3.7-inch AMOLED display almost jump out at you. The Lumia’s screen is described as “ClearBlack” because of its uncanny ability to display truly dark, inky blacks, a sign of a high-quality display.

Eschewing the typical metal or plastic shells of its competitors, the Lumia 800 features a unibody polycarbonate case, available in black, cyan, and magenta. Since the colors run straight through the polycarbonate case — instead of just being painted on — nicks and scratches are virtually unnoticeable.

The phone features Windows Phone 7.5, also known as “Mango.” Unlike other manufacturers in Microsoft’s harem, Nokia was also able to include some of its own unique apps, like Nokia Drive, Maps, and Music. (Nokia’s less-expensive Lumia 710 Windows Phone also includes these apps.) The inclusion of Nokia Music is confusing, given that it’s completely separate from Microsoft’s Zune store and app.

As is typical for a high-end Nokia phone, the Lumia 800 features a killer 8-megapixel camera with a Carl Zeiss lens. The phone can also shoot 720p high-definition video at 30 frames per second. Long before Apple’s iPhone 4 and 4S cameras wowed consumers, Nokia was shoving quality sensors into its phones. For many consumers, especially in America, the Lumia 800 will be the first taste of just how well Nokia can put together a phone shooter.

Proof there is a mobile future for Nokia (and Microsoft) 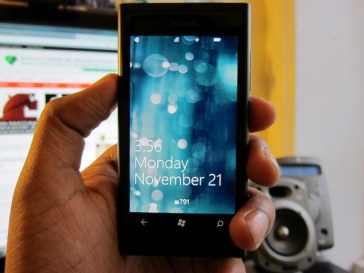 After using the Lumia 800 for several weeks, it’s hard not to imagine where Microsoft and Nokia are headed. For years, it seemed like Nokia, despite all of its hardware expertise, couldn’t create a high-end smartphone to compete with the likes of Apple and Android phone makers.

But that was the Symbian-era Nokia. Now, thanks to the Windows Phone platform, Nokia can focus on developing its killer hardware without worrying about managing an operating system of its own.

And of course, Windows Phone once again gives Nokia a gateway to the US phone market. Nokia has been struggling to land phone deals with US carriers since before the iPhone was released, and the advent of Apple’s uber-popular smartphone certainly didn’t help things. As the premiere Windows Phone maker, carriers will be fighting tooth and nail for Nokia’s phones.

For Microsoft, the Lumia 800 proves that it chose wisely by teaming up with Nokia. Even though it’s already working with popular phone makers like Samsung and HTC, Microsoft’s partnership with Nokia is unprecedented, and it will open doors for Windows Phone internationally.

Ultimately, the Lumia 800 is fetching and capable enough to sway many consumers, including those not even considering Windows Phone. While there have been several Windows Phones with better hardware, the Lumia 800 will, for many, be the first must-have device on the platform.

Below, check out our hands on with the Lumia 800 by VentureBeat’s Sean Ludwig.