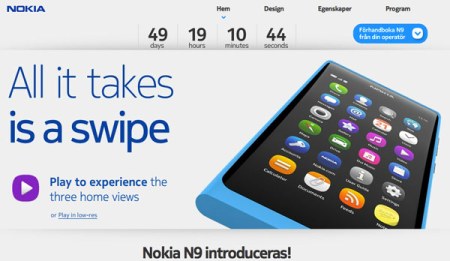 It’s like a sad countdown to a child’s bottle rocket. Nokia today launched a Swedish site counting down to the release of its new, and most certainly doomed, N9 MeeGo smartphone on September 23.

At the moment, it seems like the countdown is only referring to the N9 launch in Sweden. I’ve asked Nokia to comment on what the countdown means for the N9 elsewhere in the world (in particular the US), and will update when I hear back.

So why the negativity? Simply put, there’s no chance in hell that the N9 will be able to compete with the iPhone, Android and in particular Nokia’s flagship devices running Windows Phone 7. It looks pretty enough, and some of the better hardware design elements will make its way to its WP7 devices, but as it is the N9 will be nothing but a curiosity for both consumers and Nokia.

MeeGo, the open-source operating system Nokia was previously jointly developing with Intel (before Nokia jumped ship to Windows Phone), doesn’t have much of a shot at attracting enough developers to make it competitive against more mature mobile platforms. And Nokia has said previously that the phone will just be an experiment — not the beginning of a sustainable platform. That means anyone who buys an N9 can expect a dearth of apps and not much prolonged support from developers and Nokia.

It sports a 3.9-inch curved glass AMOLED display that leaves little room for anything else on the front. There’s no home button to speak off (the phone is unlocked by a double-tap). The N9′s case is made from a polycarbonate material that Nokia says will have better antenna performance than some competitor designs. The phone sports a unibody design that sits somewhere between Nokia’s design for the N8 and an Apple device.

As I’ve written previously, the N9 appears to be a success on paper as a sequel to last year’s N8, which had some great hardware that was shackled by Nokia’s aging Symbian OS. Ironically, this time around the N9 will be strapped with a modern OS, but one that doesn’t really have much of a future.