Android may be one of the best things Nokia brings to Microsoft.

Nokia this morning announced its long-rumored Android phone series, the Nokia X, at Mobile World Congress in Barcelona. The line starts with the 4-inch Nokia X, but there’s also the slightly more powerful Nokia X+, and the 5-inch XL.

The devices were likely in the works long before Microsoft’s $7.2 billion purchase of Nokia’s phone division was announced. But since that deal still hasn’t yet closed, Microsoft and Nokia can’t legally plan product releases. Hence, we have Microsoft’s shining mobile jewel launching a family of Android phones.

Like Amazon’s Kindle tablets, these are not typical Android devices: There’s no Google Play Store, and instead of Google’s services the phone ties into Microsoft’s cloud wherever possible. Nokia will offer Android apps through its own store, and the company says it will also support apps from third-party Android stores. The X phones don’t look like any Android phone we’ve seen before — instead, they support a blocky interface that’s reminiscent of Windows Phone.

But for Nokia, which has been slow to compete in the high-end phone market despite having great hardware, the X lineup could be a key strategic maneuver. 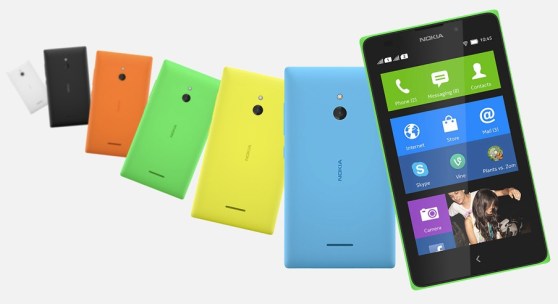 The X phones aren’t meant for the U.S. — and that’s the point.

Instead, they serve as the next step up from Nokia’s Asha smartphone lineup. The Asha phones offer some basic apps and are powered by the company’s aging S40 software. Starting at around $122 (89 euros), the X gives Nokia a way to compete with cheaper Android phones popularized by Chinese companies like Huawei and ZTE.

During Nokia’s press event this morning, Stephen Elop, Nokia’s former CEO who will serve as the head of Microsoft’s devices and services unit after the Microsoft purchase is completed, mentioned that the X series is targeting “growth” markets specifically. These are markets like India, Latina America, and Africa where a burgeoning number of users are likely ready to move on from their feature phones or basic smartphones.

Nokia now has a phone line for every type of potential mobile user: feature phones and slightly more advanced Asha phones for “emerging” markets; this Nokia X line for “growth” markets; and its Lumia devices for the more tech-savvy markets.

Given the intended markets and price points, the X phones aren’t exactly powerhouses: They’re all powered by dual-core Snapdragon processors (the exact speed hasn’t been revealed) and offer 5 megapixel cameras. But that sort of hardware is comparable with similar inexpensive Android phones. Nokia’s big advantage is its wealth of design and manufacturing knowledge, which allows the company the carry many of the best design elements from its Lumia phones to a mid-range Android line.

In the end, the Nokia X lineup makes sense for Nokia — but it makes even more sense for Microsoft. While Microsoft is reportedly in the middle of an internal battle over supporting Android apps on Windows Phone, Nokia has developed its own entry into the Android market that doesn’t compete with Windows Phone in any way.

If anything, having a cheaper smartphone line that ties into Microsoft’s services is a great gateway drug to the company’s higher-end Windows Phones.