Nothing particularly Earth-shattering debuted at Mobile World Congress (MWC) in Barcelona — the usual array of smartphones were unveiled with Samsung taking top billing, net neutrality emerged as a talking point thanks to FCC chair Ajit Pai’s attendance, and the 5G steamroller trundled into second gear with some interesting early innovations rearing their heads.

But buried within the hullabaloo of Samsung flagships and promises of a future 5G utopia, HMD Global — the “home of Nokia phones” — unveiled not one, not two, but five new Nokia-branded phones.

Constituting four smartphones, one of which was the Nokia 7 Plus flagship, as well as a nostalgia trip in the form of the reimagined Nokia 8810 “Banana Phone,” it was clear that the Nokia mobile phone brand is here in a big way. 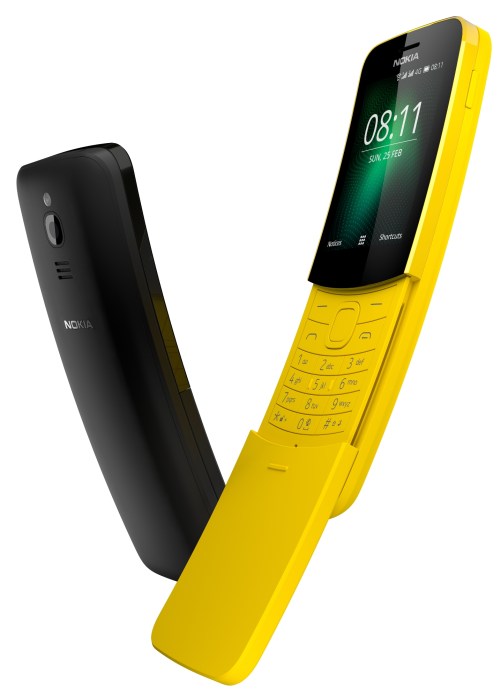 So Nokia (the company) has no direct role in developing these phones, aside from lending its famous name to the handsets. After all, why would you use the corporate-y “HMD Global” nomenclature on your device when you have a perfectly good legacy mobile phone brand, recognized by billions, at your disposal?

Though it is still early days, things seem to be working out reasonably well. In December, HMD Global marked its first full year of its 10-year licensing deal with six smartphones and five feature phones on the market. Throw into the mix the further five new devices announced at MWC last week, and Nokia will soon have 16 new mobile devices available to buy around the world. And early numbers have been encouraging.

In December, one analyst at Counterpoint Research reported that Nokia-branded phones were the 8th most popular globally in terms of shipments in Q3, while it was apparently the top-selling brand in the Middle East and number three in the U.K. It’s worth noting noting that these figures bundle both feature phones and smartphones together.

Its one year anniversary and @HMDGlobal has had a great year so far for comeback of @nokiamobile brand:

These numbers are not concrete, but they are promising. And HMD Global was clearly looking to strike while the iron is hot with the five new phones announced at MWC. However, it’s important not to get too carried away, because Nokia’s recent footprint puts it at just one percent of the overall smartphone sales market share.

Moreover, it’s worth looking at the bigger picture to remind us of how we got to this point.

The timing of the latest launches was notable in terms of historical context — the Nokia mobile phone brand has embarked on quite a downward trajectory over the past decade.

In February 2008, a Gartner report pegged Nokia as the world’s number one mobile phone brand by far, accounting for around 40 percent of all smartphone shipments the previous year. However, Apple had only just shipped the first iPhone in mid-2007, and the first commercially available Android phone didn’t hit the market until late 2008. And with the smartphone war only just beginning, Nokia snapped up Symbian in 2008 to boost its own ambitions in the burgeoning space.

What happened next was rapid. It’s always interesting to look at certain tech companies’ share prices around the time that the iPhone and Android devices starting rolling out. In the case of Nokia, its shares slid almost vertically between October 2007 and October the following year, its stock price dropping more than half. By 2011 the company was in Microsoft’s pocket as the duo fought to push a third force in the smartphone operating system realm, and Nokia’s stock price hit an all-time low in 2012. By 2014, Nokia’s mobile phone business was owned outright by Microsoft, but by the following year Microsoft had taken a $7.6 billion writedown on the acquisition. And in 2016 Microsoft pretty much washed its hands of the whole sorry Nokia episode.

It’s at this point that Nokia realized it would have to start again from the bottom up, because it didn’t have the necessary manufacturing infrastructure to produce hardware at scale. But what it did have was a brand. A powerful brand that millions of people over a certain age recognize. It didn’t matter who actually made the phone — all that mattered was that there was a clear Nokia badge on the phone.

While many had written the whole HMD Global / Nokia escapade off as a lost cause, armed with a powerful brand, a mixture of mid- and high-end Android phones, and a dash of nostalgia with the Nokia 3310 and the just-announced 8810, what we have is a credible attempt at reviving the once-mighty Nokia phone brand.

But one swallow doesn’t make a summer. Or, in HMD Global’s case, a couple of reasonable quarters and a new slate of phones don’t mean world domination. But what this does show is the power a brand can hold over consumers.