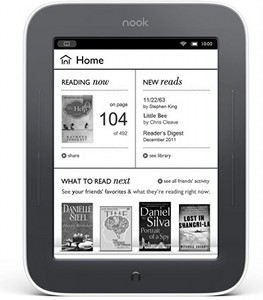 Barnes & Noble will release a limited edition Nook Simple Touch e-reader with a white border for a bargain-bin price of $79 on Black Friday, the company announced today.

The most basic Amazon Kindle now retails for $79, no matter what day of the week is. However, the Nook Simple Touch has several clear advantages, as the basic Kindle does not have a touch screen and features some advertising.

Barnes & Noble has also listed some Nook accessories it will have discounted on Black Friday: a free Clear Screen Film Kit with purchase of a Nook Color or Nook Tablet Power Kit will sell for $24.95, and a free Nook Simple Touch Power Adapter with purchase of a Lyra Light will sell for $14.95. The company also plans to offer 50 percent off on a number of book titles.

Both Amazon and Barnes & Noble are locked into the strategy of offering subsidized hardware with the aim of selling lots of content to generate revenues, unlike Apple, which pushes media access to better sell hardware. While Amazon has a bigger presence in e-books, we can’t help but love the competition between B&N and Amazon in this space. Because when they fight, we win.