One of the most popular year-end features on the blogosphere were lists of which companies would go out of business in 2009. It’s early, but we already have our first victim.

Nortel, the telecommunications equipment giant, filed for bankruptcy protection today. It could come out of this just fine, but it won’t have an easy road. AOL’s money and finance section saw this one coming way down the road. 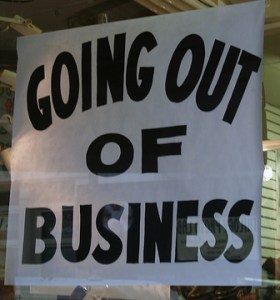 Others on the lists (like Chris O’Brien’s from the San Jose Mercury News) from the tech world included Advanced Micro Devices, Sun Microsystems, Sirius Satellite Radio, Charter Communications and others. Palm has been named, but it may have pulled a rabbit out of its hat in the past week.

Nortel had a $107 million interest payment due this week on its $3.8 billion in debt. In 2000, the company was valued at about $250 billion — now its market capitalization is $275 million. The company expanded with the internet boom but got stuck with excess inventory in the bust of 2001 and 2002. It never fully recovered its mojo, and the economic crisis was the nail in the coffin.

This is indeed a year when we’re likely to see some familiar tech companies and brands disappear. But at least there will be others that thrive in the recession to take the place of those that have failed. Anyone have a guess on who’s next?