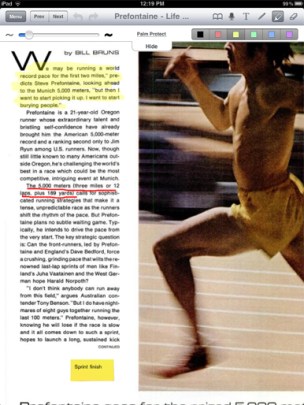 The popular iPad notetaking app Noterize has been acquired by Nuance, the company most famous for its Dragon Naturally Speaking voice recognition software, the Unofficial Apple Weblog reports.

With many rumors pointing to Apple including Nuance’s technology in its upcoming iOS 5, the Noterize purchase seems particularly telling. One of the most popular uses of Dragon on desktops is to dictate and edit documents, so it’s certainly worth it for Nuance to have a solid iOS document editor in its stable. Nuance will then only need to tack on voice recognition capabilities to have a new flagship app ready for iOS 5 this fall.

Nuance’s technology could end up being more useful for notetaking on mobile devices than it is on desktops. Apple’s iOS devices all generally rely on software keyboards (excluding the iPad’s hardware keyboard accessory), which generally make typing and editing documents overly difficult. Having voice control for dictation, annotation and other editing tasks could end up being a godsend for many users. It would also help iOS remain competitive against Android, which has Google’s own voice-to-text service available throughout the OS.

As a result of the purchase, Noterize has been taken down from Apple’s App Store. The app joins other strategic purchases Nuance has made over the last few years, including voice-to-text services Jott and Spinvox.