Numbers make the world go ’round. Or so the old adage should go.

Numbers hold a lot of inherent meaning within the context of things that matter to us, be it hobbies, work, or the world at large. Whether it’s counting down to your holiday, counting up from when you stopped smoking, tracking your website’s monthly average users (MAUs), or knowing the current euro-to-dollar exchange rate — numbers are important.

This is the thinking behind Numerous, a startup founded in 2013 by John Scalo, a developer who plied his trade at Apple for twenty years; and Charlie Wood, formerly CEO of Spanning, a data backup company acquired by EMC last year. Numerous was built for numbers geeks.

The app’s core raison d’être is to help you track all those important numbers in your life, and Numerous has just lifted the lid on a major face-lift, which ushers in a new logo, user experience, integrations, and features. It’s basically a new product. 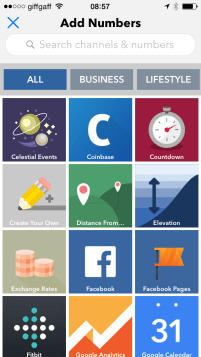 Above: Numerous: Create a new ‘Number’

Available for iOS and Android, Numerous lets you build a profile of all the numbers in your life that mean something to you.

You can dig through the myriad of categories and pre-created “Numbers” — you can create tiles that always show your elevation, distance from a specific location, temperature, fitness data, number of Twitter followers, Facebook friends, and more. You can also set up alerts so that you’re notified whenever a number changes (based on a threshold set by you).

With the latest version of Numerous, there is a brand new category in tow — Business Numbers. This taps the likes of Salesforce, Stripe, Google Sheets, Google Analytics, Facebook Pages, Coinbase, and more.

This move beyond “personal” numbers and into the enterprise signals where Numerous is heading — it’s encroaching on the territory of data dashboard aggregators such as Geckoboard. Except through Numerous, you can view key Salesforce metrics alongside the number of followers you’ve accrued on Twitter and the number of days until “The Martian” is released in theaters. 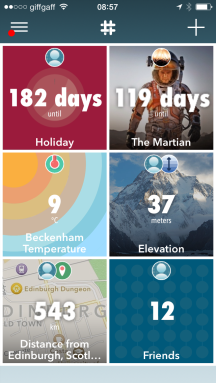 What you end up with is a tile-filled screen full of numbers — which can be edited, deleted, and moved.

You can also manually create tiles. For example, “Countdown” lets you enter a date and a title, and then the number of hours or days since/until that date will update automatically.

Moreover, with IFTTT support now included in the offering, users can create actions based on their numbers. This could be something trivial such as “When the company Facebook account hits 10,000 ‘Likes,’ email my boss to ask for a raise.”

As Numerous also integrates with Google-owned home-automation company Nest, you can also set up rules that tie the numbers to physical objects in your home. And there’s scope to open this up to other “Internet of things” companies, too.

Indeed, this launch also sees Numerous morph into a platform — it has launched two new APIs which serve up access to Metrics, letting users create and update numbers; and Channels, which lets developers connect the app to additional sources of data that Numerous doesn’t offer itself.

“The world is increasingly instrumented and life is increasingly quantified,” says Numerous co-founder Charlie Wood. “We want people to be able to spend less time checking their phones and more time enjoying life. With today’s launch, Numerous realizes our vision of an end-to-end system that connects people to the numbers that permeate their lives and puts those numbers to work.”

Perhaps my one big gripe with Numbers is that you can only sign up using Facebook, Twitter, Google, or iCloud accounts — there is no email option. If you’re fine with that, then it’s plain sailing.

Also, the Android version seems decidedly less slick and feature-rich than the iOS incarnation. When you elect to add a new “Number” from the category list, it isn’t categorized in the same intuitive way as on iOS, and there don’t seem to be the same options. Moreover, there’s no obvious way of deleting a “Number” from your homescreen.

Numerous, by the numbers

Numerous is based in Austin, Texas, and Santa Cruz, California. The company has raised $700,000 in seed funding to date, from well-known names such as FG Angels, Techstars Ventures, and Stage One Capital. The company also hinted that a Series A round isn’t far off.

The company tells us that it’s planning to expand in order to cover more platforms in the short-term, with a Mac and Web app on the horizon — and this could be key if it is to appeal more to the business fraternity.

Numerous also says that plans are afoot to add myriad types of sports data to the mix, including real-time sports scores and ladders for the likes of the NFL and NBA. The fantasy sports industry is said to be worth $15 billion in the U.S. alone, so reeling in detailed stats for players and teams will figure highly on Numerous’s agenda.

At any rate, Numerous is a beautifully simple, fun, and addictive app that should find fans from all walks of life.