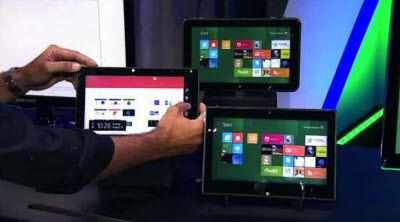 Nvidia said today that one of its chips is powering the Windows 8 tablet computer that Microsoft showed on stage at its Build conference today.

The tablet is an example of a device with next-generation graphics that Microsoft and Nvidia hope will steal market share away from Apple’s iPad and establish Windows as a real alternative in the tablet OS market.

Nvidia created the tablet to demonstrate what a Windows 8 tablet could look like. The device includes a quad-core Tegra processor, code-named Project Kal-El, which is an ARM-based system on a chip. The chip promises PC-like graphics and high energy efficiency.

Rene Haas, general manager of the notebook division at Nvidia, said in a conference call that Nvidia has been working on Windows technology for more than 15 years and it brings that knowledge to the task of making ARM-based tablets running on Windows 8.

Nvidia also said that it is creating a Windows 8 developer program to provide developers with tools and resources for building applications for both ARM-based and Intel-based devices that run Windows 8. Nvidia hopes that Windows 8 will bring a seismic shift to tablets, in part because Nvidia is shut out of tablets made by Apple, which designs its own chips.

Tim Sweeney, founder of Epic Games, said he was excited about the opportunity to take graphics to the next level using state-of-the-art graphics technology in the new tablets.