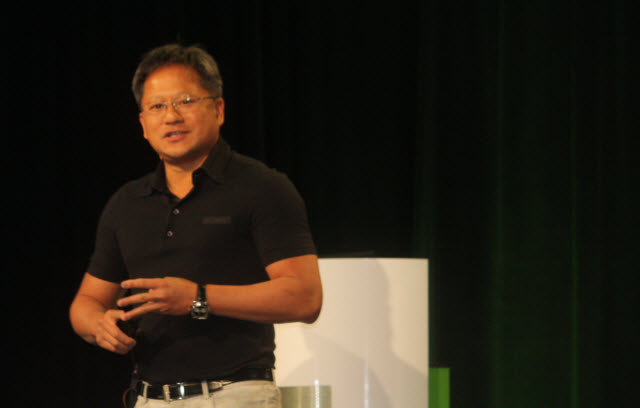 Chip-maker Nvidia showed that a tablet computer with its new Tegra 3 processor for mobile devices can run Windows 8.

Huang made the announcement at the company’s press conference at the Consumer Electronics Show in Las Vegas. The Tegra 3 uses the ARM architecture rather than the Intel-dominated x86 architecture, so it is interesting that the ARM-based Tegra 3 can now run Windows, which has been Intel-based for many years.

Microsoft announced last year that it would add ARM-based processors to the chips that can run Windows 8. Now the day is near when ARM-based vendors such as Nvidia will crack the hold that Intel and Advanced Micro Devices have had on PC chips.

“I can’t wait to ship it,” Huang said. “This is going to be a fantastic tablet year, with (Google’s) Ice Cream Sandwich and Windows 8.”

Nvidia, which is the largest stand-alone maker of PC graphics chips, spent most of its press conference showing how well rich applications can run on Nvidia-based tablets with Tegra 3 chips. Huang showed off the graphics features of Tegra 3, playing cool 3D games such as Wipeout HD and Shadowgun (a first-person shooter game) on an Nvidia-based tablet. Huang used one of the best pro gamers on the planet, Johnathan “Fatal1ty” Wendell to demonstrate the game on an Asustek Transformer Prime tablet-and-PC hybrid.

Jerry Shen, chief executive of Asustek, said that his company had just announced a 7-inch Tegra 3-based tablet for $249. That’s a very low price for a tablet computer using a quad-core Tegra 3 chip. It has all-day battery life and can run cool games.

Huang closed with a note that the Tegra 3 will appear in “some of the world’s fastest cars,” including a Lamborhini model, in addition to cars being made by Audi. Audi evidently has more announcements about car electronics systems coming up.