The platform includes the Jetson TX2 “embedded AI supercomputer,” a chip and its surrounding hardware that can power 4K video drones that consume only about 7.5 watts of power. Drones with the TX2 solution can operate two cameras simultaneously.

The Jetson 3.0 platform was designed for AI “at the edge” of the network, rather than in the cloud or an internet-connected data center. The challenge is that drones with cameras can capture a huge amount of data.

This means Jetson has to handle a lot of the processing of data at the edge, in the device itself, rather than transferring all of that data to the cloud, said Deepu Talla, vice president and general manager of Nvidia’s Tegra business unit, at a press event in San Francisco.

“Pretty much every industry we know is being transformed by AI,” he said. “We’ve seen an AI version of GO beat the world’s best human.”

Services are AI-powered too, with things like Amazon Alexa and OK, Google.

“All are adopting the Nvidia computing ecosystem,” Talla said.

Patrick Moorhead, analyst at Moor Insights & Strategy, said the new platform uses Nvidia’s latest Parker-based Tegra chips and can deliver about double the performance of the previous generation of drone chips without increasing the amount of power used. 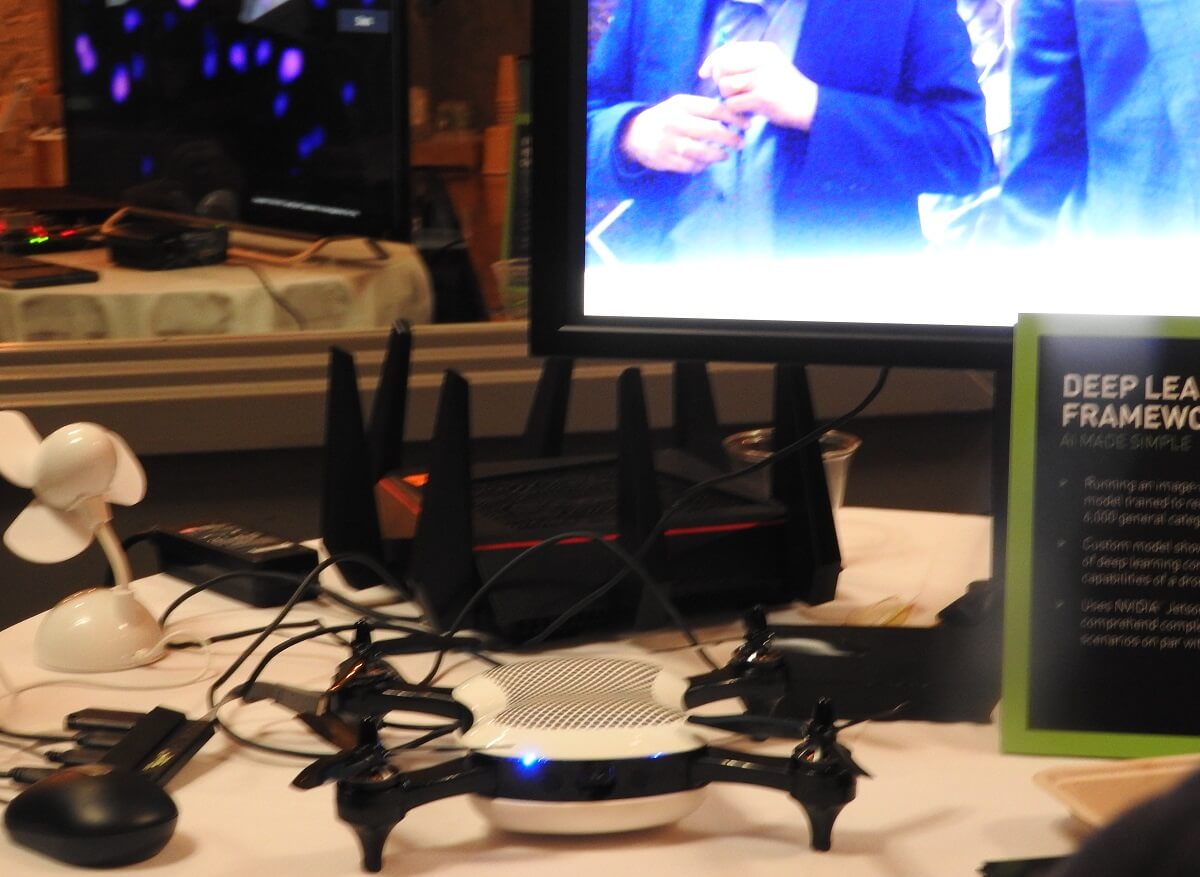 “Like a car, there are many applications that require a lot of compute power at the edge for machine learning and artificial intelligence,” Moorhead said. “Based on the quality of their partners, it shows Nvidia has a really good offering.”

That’s surprising, since most of Nvidia’s success has been in things like self-driving cars, he said.

GPU-based deep learning can crunch all of this data much faster than before. Nvidia’s GPU enhancements and software frameworks have helped improve AI by two orders of magnitude. Deep learning training used to take months. Now it takes days or hours.

Deploying neural networks usually happens in the cloud, going from a smartphone to a cloud. Nvidia’s Tesla can do AI inferencing in the data center.

But with Jetson, Nvidia is migrating AI to edge devices, like drones, that often have limited bandwidth, high latency, and a lack of wireless reception.

“For confidentially reasons, you don’t want to store a lot of data in the cloud,” Talla said.

Nvidia has partners such as Fanuc, Toyota, Starship, Cisco, and others. Nvidia makes it easy for them to adopt the tech with its Jetson software development kit, which sits on top of the Linux and the Tegra processors that Nvidia makes.

Teal, a Salt Lake City, Utah-based startup, showed a drone with the Jetson platform in it. The drone, also called Teal, uses deep learning software from a startup called Ziff to recognize images, such as people. It could be used in a search and rescue operation, flying over a wide territory and reporting back only when it identifies a possible human in a remote area. The drone will cost about $1,200.

Lowes is also using a Jetson-based robot from a company called Navii. The robot is used in stores to scan shelves to see what inventory needs to be replaced. It can also guide shoppers around to different products in the store, using voice recognition.

Nvidia launched its first Jetson platform about 18 months ago. Now the company is adding more AI capabilities on top of Jetson. The Jetson TX1 hardware can deliver 4K video decoding and other high-performance parallel computing tasks. But the Jetson TX2 hardware can double down on these tech capabilities.

The TX2 developer kit costs $600 at retail and $300 for education applications. It is available for preorder now in the U.S. and Europe and will ship in those territories on March 14. In April it will ship in Asia and other regions.

Rivals include Intel, which makes both chips and drones. Kevin Krewell, analyst at Tirias Research, said that Nvidia’s solution has wider flexibility and is likely targeted at more high-end solutions, while Intel targets both mid-range and high-end drones.

Talla said that there’s a good market opportunity at the high end of the market, where Nvidia plays. He added that while you pay more for solutions at the edge, you save on a lot on the data processing that happens in the data center because you are sending pre-processed information rather than raw data.