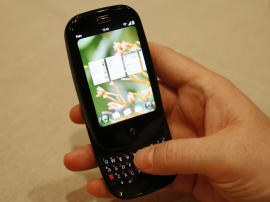 It seems like it was just yesterday that Palm made a last-ditch effort to take on the iPhone with the Palm Pre. What we got was a pretty slick phone with multitasking and a mobile operating system, WebOS, that wasn’t quite a match for the iPhone but which would go on to do much greater things.

Now things have come full circle, and Sprint — which at one point heralded the Palm Pre as its flagship device — has taken the phone out of its stores and signaled the end of its life.

Palm said it expected thousands of developers to quickly begin making applications for the platform. The unfortunate truth was that all those developers flocked first to the iPhone operating system, and then to Google’s Android operating system. To date, there are around 300,000 apps on the Apple App Store and around 100,000 on the Android marketplace.

Now that Sprint has all but killed support for the Pre, the major damage may come from a lack of developers. Most Pre users ended up on Sprint, and Sprint’s move could serve as a signal for them to upgrade to a more powerful phone. With a smaller user base, more developers will likely end up turning to the iPhone operating system, iOS, or Google’s Android to remain relevant.

A slightly upgraded Palm Pre and Palm Pixi — it’s smaller, underpowered sister — have found their way to Verizon but have been more or less unnoticed. That’s prompted Verizon to slash the prices of the two phones to $49.99 for the Pre and $29.99 for the Pixi — both with two-year contracts. So developers probably won’t be getting any help on Verizon’s end, either.

Sprint Nextel’s highly publicized launch of the Palm Pre smartphone failed to turn around losses in the company’s subscriber base yet. In the quarter after the Pre’s launch, the company lost $384 million — compared to $344 million loss in the same time a year ago. Part of that probably had to do with Palm waiting to launch the phone until after Apple released the iPhone 3GS.

The olive branch finally came when Hewlett-Packard announced it would buy palm for $1.2 billion. During a conference call discussing the acquisition, HP executives emphasized that the deal to acquire smartphone maker Palm was about more than phones. Executive vice president Todd Bradley described Palm’s WebOS operating system as something that can also power tablet computers (or, as HP prefers to call them, “slates”) and the low-end laptops known as netbooks.

There’s obviously a lot of potential for WebOS as is evident in the price HP paid to get it. HP also recently announced the next iteration of WebOS, as well as a new version of the Palm Pre that will make its way to Verizon in the coming months. But it might be too little, too late, with Android and Google clearly leading the pack in terms of App developers.