Using light instead of Wi-Fi to beam data across a room might soon be the norm for everyday business, if Oledcomm has its way. At the 2019 Consumer Electronics Show, the French company announced a low-profile ceiling lamp — LiFiMax — that offers an internet connection over light waves to up to 16 users simultaneously at a peak speed of 100Mbps.

It’s an improvement upon the previous version of Oledcomm’s technology, MyLiFi, an LED desk lamp with a relatively short range and a maximum speed of 23Mbsp.

“LiFiMax is the result of more than 10 years of research. We have worked to create a product based on the new communication standards and offer companies unprecedented security and speed in wireless internet,” said Benjamin Azoulay, Oledcomm’s president.

For the uninitiated Li-Fi — short for Light Fidelity — is an alternative to conventional wireless technologies that taps visible, infrared, or ultraviolet light to broadcast bits and bytes back and forth. Its proponents argue that it’s inherently more secure than Bluetooth or Wi-Fi because light can’t penetrate through walls and other obstacles, and that it’s well-suited to environments like hospitals, where minimizing wireless interference is paramount. 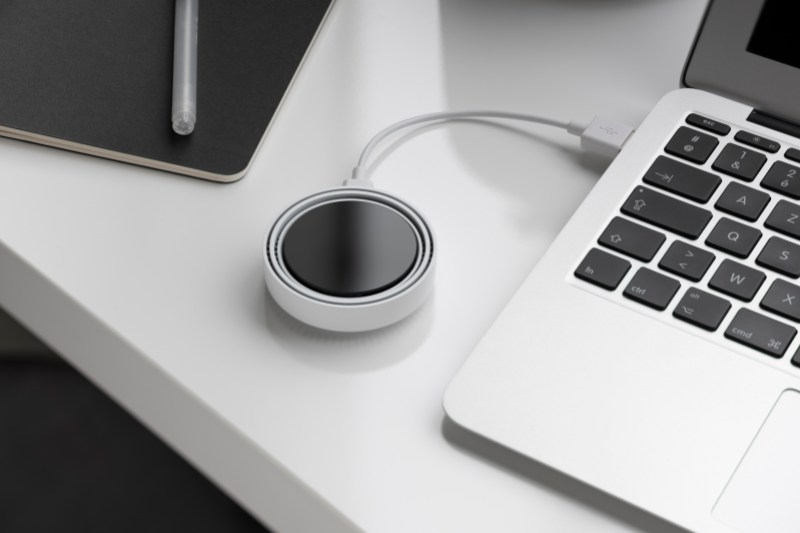 French researcher Suat Topsu and colleagues pioneered the technology nearly 15 years ago, in 2005. Topsu founded Oledcomm in 2012 and served as president until Azoulay — who previously worked on the launch of the Philips Hue — assumed the role.

“[Li-Fi] … suits new ways of working together,” Azoulay said. “Aeronautics and the Automotive Industry are particularly interested [in this technology].”

Oledcomm claims that the LiFiMax, which measures about 4 inches in diameter and an inch thick, is the most powerful Li-Fi transmitter in the world, with a maximum range of 92 feet. It bolts to the ceiling of any conference room and, like a router, plugs into an available ethernet socket. Average speeds range between 40Mbps and 100Mbps, depending on congestion and other factors.

Light signals from the LiFiMax are received and converted into data by a dongle, which connects to devices via USB.

“LiFiMax is the result of more than 10 years of research,” Azoulay said. “We have worked to create a product based on the new communication standards and offer companies unprecedented security and speed in wireless internet.”

LiFiMax will go on sale later this year, but it won’t be cheap. A single pack, which includes a transmitter and a single receiver, starts at $900. (A five-dongle LiFiMax Office will be available for an undisclosed price.) That’s more economical than Oledcomm’s $840 Li-Fi desk lamp, but not by much — especially considering mesh Wi-Fi routers like Google Wi-Fi top out around $130.

Oledcomm, however — along with the rest of the Li-Fi Consortium, an industry group formed to promote high-speed optical wireless tech — is betting it’ll find its niche. Time will tell.