Tablets’ explosive growth began in early 2010 shortly after Apple’s launch of the first generation iPad. Since that point, the percentage of tablet-owning Americans has nearly doubled every year, thanks in no small part to the popularity of lower-cost tablets such as the more full-featured versions of Kindle and Nook.

The exponential ownership growth, the report said, is mostly among households earning more than $75,000 per year, college graduates, and adults ages 35 to 44. 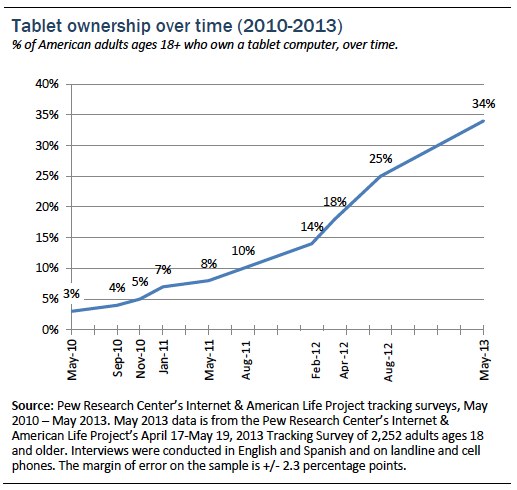 “One of the things that is especially interesting about tablet adoption compared to some of the patterns of other devices we’ve studied is how these technologies’ growth has played out between different age groups,” research analyst Kathryn Zickuhr said in a statement on the report.

In 2012 younger adults ages 18-29 were equally as likely to own tablets as people in their thirties and forties, according to the study. But that changed in 2013 with the 30-49 group now significantly more likely to own a tablet.

The study also indicated that parents with a minor living at home are also tablet adopters, the study said, with about 50 percent, an increase of 24 percentage points from 2012.

Men and women were equally likely to own a tablet, the study said, as were people from various ethnicities.

The study did not break down tablet ownership by the device’s brand.