Three weeks after OnePlus officially unveiled the OnePlus X at an event in London, the China-based mobile phone maker finally launched its third smartphone for North American users this week. 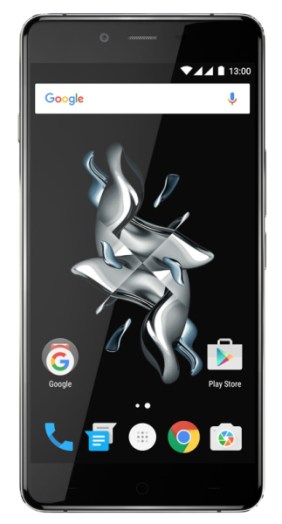 As with its two previous devices, including the OnePlus 2, which launched a few months back, OnePlus is only making the device available to buy for invite-holders. To get an invite, you will have to win one through a company contest or be “invited” to buy one from someone who’s already bought the device.

For those not in possession of an invite, OnePlus also has been selling phones at pop-up events around the world. The company is supposed to reveal details for its next Los Angeles-based event today.

As you can see, it remains fairly hard to get your hands on either a OnePlus 2 or a OnePlus X. We managed to get them here at VentureBeat, however, and, after using the OnePlus X for a little more than a week now, and we’ve compiled some thoughts on the device.

We always knew OnePlus planned to launch a second flagship phone in 2015 — and the OnePlus 2 is just that. However, ongoing rumors had suggested there would also be a stripped down “Lite” version of the handset (similar to what Samsung does with the Mini versions of its flagships). So when the OnePlus X was finally unveiled, it was something of a surprise — there was nothing lesser or dumbed down about it — it was just a different phone aimed at a different demographic.

OnePlus unveiled two variants of the OnePlus X: the “OnePlus X Onyx” and a limited-edition ceramic version that is pretty much the same as the Onyx, apart from the obvious difference in materials.

VentureBeat tested out the $250 OnePlus X Onyx, which sports a 5″ AMOLED full HD display, black glass back plate, and a metal bezel. It feels like a premium handset.

The phone represents a departure from the company’s previous efforts insofar as it evidently wants to appeal to a less-techy, more style-conscious market. The specs are, of course, still important, but it was clear after using the OnePlus X for just a few minutes that this device is more about look and feel than it is about what’s going on under the hood.

“It’s a product geared towards a more mainstream audience, people who care about the size, the build quality, the materials more than the specs,” explained OnePlus cofounder, Carl Pei, in an interview with VentureBeat last week. “The specs are more thoughtfully selected, because right now the additional benefit of having a faster processor for the user is not that big any more. People value things like design, first impressions, camera, and build quality much more.” 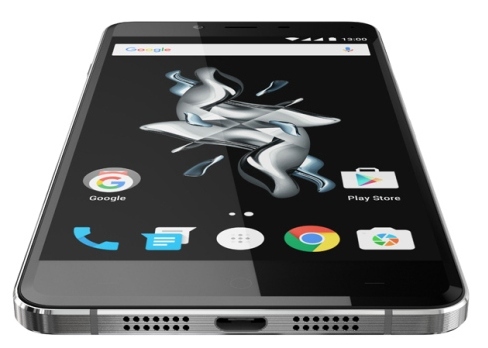 The phone’s smaller size will be a selling point for many. It’s markedly thinner, shorter, and narrower than the OnePlus 2, and will appeal to those with smaller hands or who don’t like walking around with a mini laptop in their pocket. Indeed, at 4.86 ounces (138g) this is the company’s lightest device yet, and with dimensions of 140mm x 69mm x 6.9mm it’s also the smallest OnePlus unit, to date.

If you’re accustomed to a larger device, such as the OnePlus 2, the smaller screen may be an issue. But if you’d rather beam videos to your big screen via Chromecast, you’ll be fine. 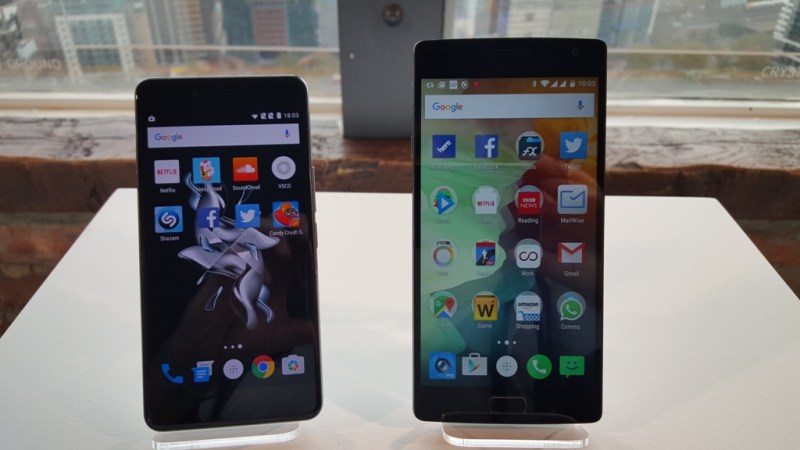 With the OnePlus 2, the company became one of the first manufacturers to ditch micro-USB for the new USB Type-C standard, meaning the phone has a reversible-plug connector. With the OnePlus X, the company has reverted back to micro USB, meaning you can still use all your old cables to charge the device.

Located on the bottom of the phone, the micro USB port is flanked by two speakers. 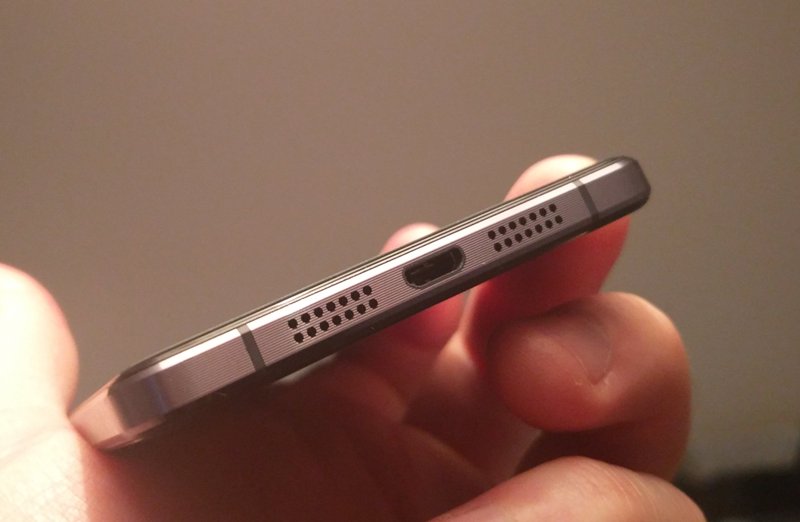 Down the right-hand edge is the SIM / microSD slot, volume buttons, and power buttons. 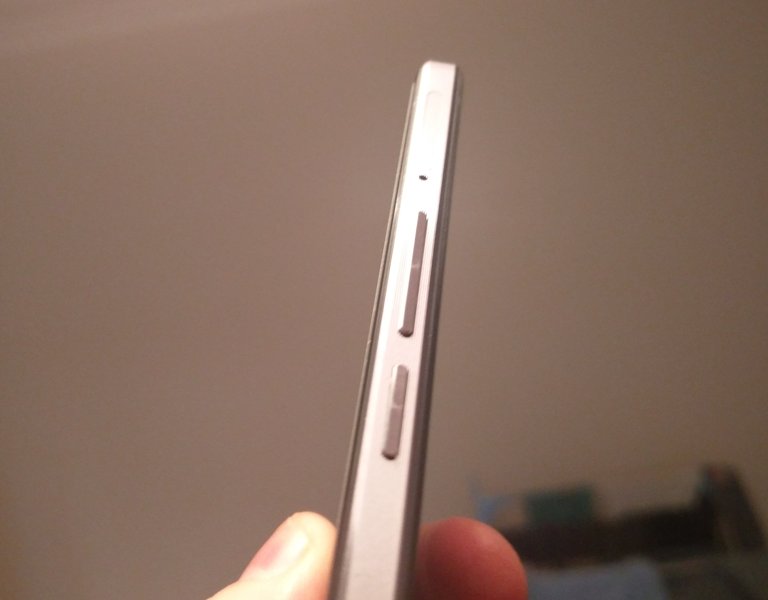 On the left-hand edge, OnePlus has included the same alert slider it introduced for the OnePlus 2. This is actually a super useful feature. It is a three-position switch that lets you receive audio alerts (bottom mode) or no audio alerts (top mode). But the middle position lets you stipulate that you should only receive priority notifications, a feature Google released with Android Lollipop 5.0. To use this, you have to allocate “priority” status to contacts in your address book. 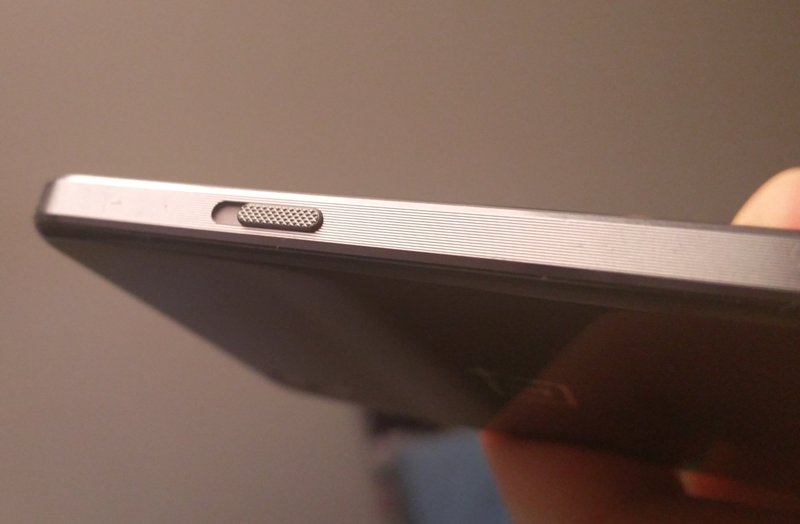 Aside from that, the alert slider also makes it easy to silence your phone without having to take it out your pocket — handy if you’re in the theater, cinema, or anywhere else where it may be impractical to activate the bright glare of the screen to silence your device.

Inside the OnePlus X

While OnePlus is targeting a more mainstream audience with this device, it still put some thought into what’s going on inside the OnePlus X.

The OnePlus X only comes in one 16GB storage version. However, the phone is dual-SIM, meaning you can insert two (nano) SIM cards and travel with two different phone numbers. But the second SIM slot actually doubles as a microSD card holder, meaning this device can be expanded up to 128GB. This will no doubt be good news for many, but it is a shame that you can’t elect to have both dual-SIM and expandable storage at the same time.

The SIM / microSD drawer is located in the side of the device. And given that the battery on the OnePlus X is non-removable, the rear cover on the phone wasn’t designed to come off easily. 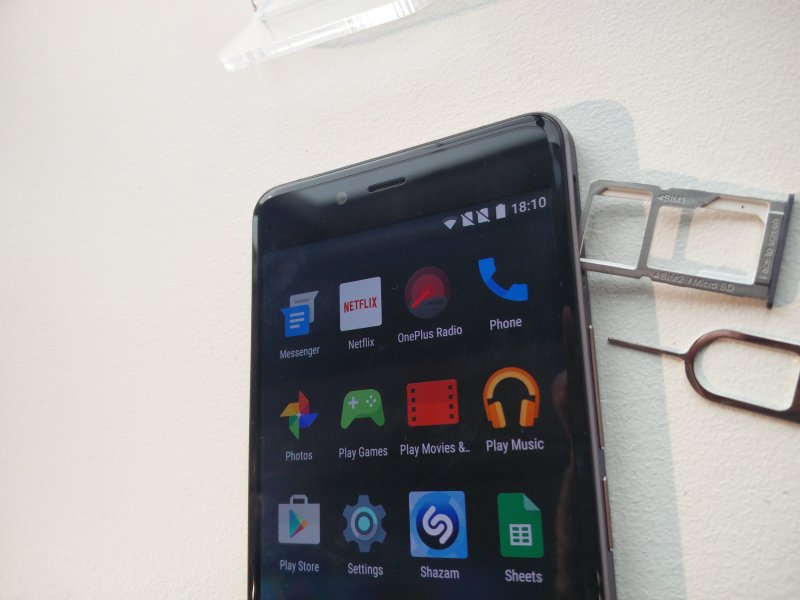 It’s also worth noting here that while the OnePlus X does support LTE, it is heavily restricted on some 4G networks in the U.S. This could be a deal-breaker for some.

Sporting a 5” AMOLED Full HD (1920 x 1080p) display with 441 ppi resolution, the OnePlus X screen is sharp and crisp. The bottom-loaded speakers are also impressive, meaning you could quite feasibly watch a 30-minute Netflix show without hooking up to any external screens or speakers. For anybody, like myself, who is long-accustomed to 5.5″ screens, the OnePlus X does feel a little on the small side to use as a stand-alone video-entertainment device. But obviously, that depends on what you’re used to.

With a 13MP rear-shooter and 8MP front-facing incarnation, the cameras on the OnePlus X are pretty much on a par with the OnePlus 2. Indeed, the OnePlus X takes excellent photos, for the most part, though evidence of where some costs may have been cut can be found in the lens.

It was hard to distinguish between photos taken on the OnePlus X, OnePlus 2, and my iPhone 5 during the daytime. But when the light started to fade, things began looking not so great for the OnePlus X. There actually wasn’t too much difference between the OnePlus X and the iPhone 5, but the OnePlus 2 performed better in low light. 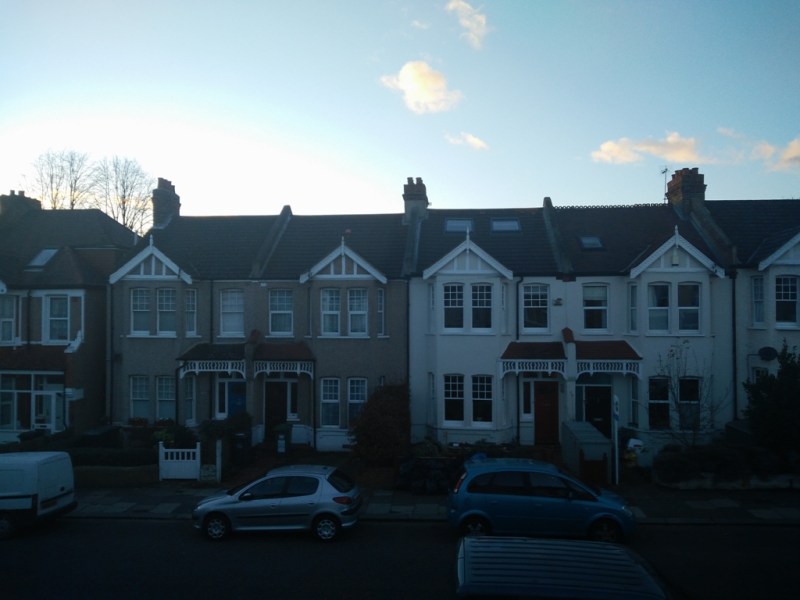 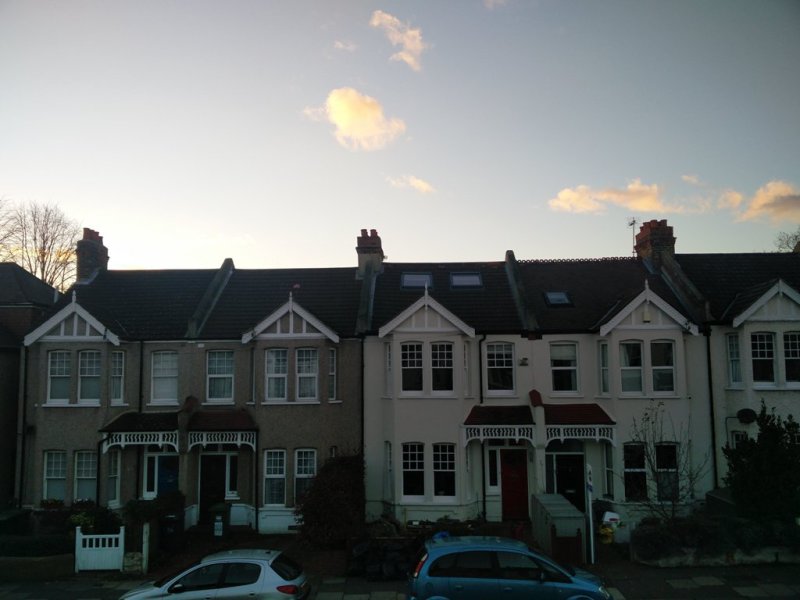 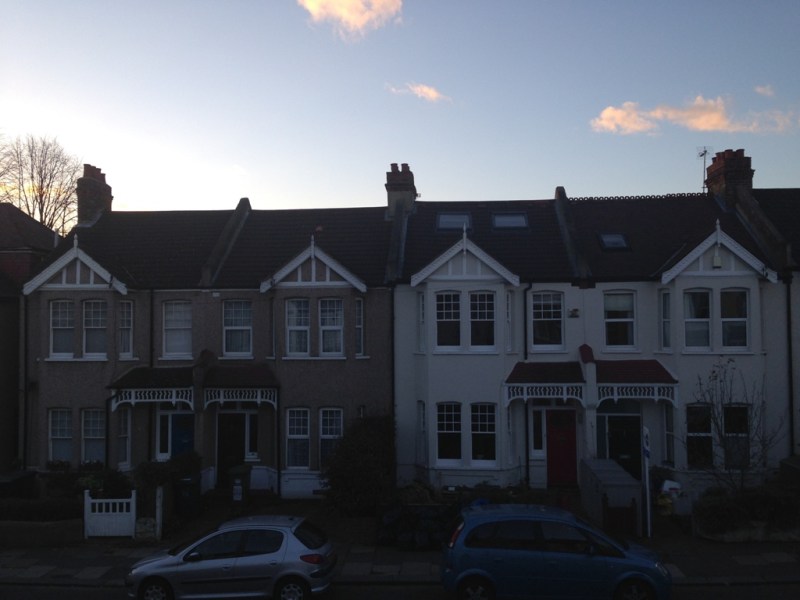 Though the OnePlus X is an Android phone, it ships with its own flavor of the mobile operating system. Oxygen OS gives you access to all the wonderful worlds available through Google Play, YouTube, Google Maps, and so on. But it also comes with a number of additional features that OnePlus has included out-of-the-box.

For example, there is a useful drawer that slides in from the left, giving easy access to frequent apps and contacts. 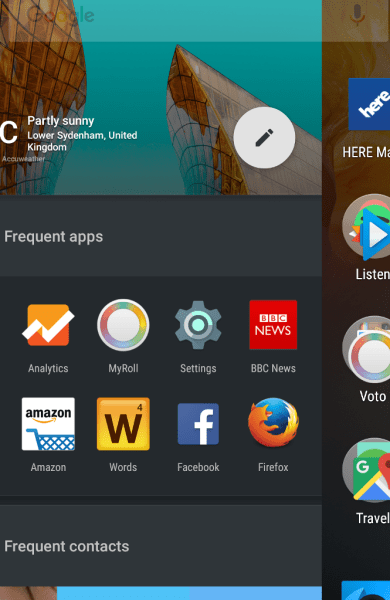 But one of the most curious quirks of the OnePlus X surely has to be the inclusion of an FM radio app. Yup, with this phone, you can listen to local radio stations even when your phone is completely offline.

Similar to how it used to work on feature phones, OnePlus Radio uses your headphones as an antenna. It’s not a totally unique feature to have in a smartphone — Samsung, HTC, and Sony, among others, have included offline FM radio on their devices in the past. But as someone who had more or less forgotten about FM radio, it did come as a surprise. 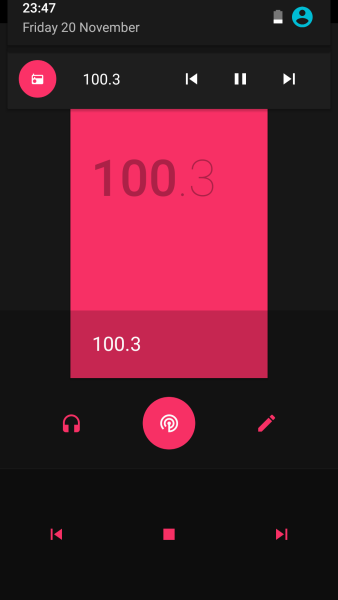 Given the OnePlus X’s reduced size, its non-removable battery weighs in at only 2,525 mAh, compared to the OnePlus 2’s 3,300 mAh. However, its more demure dimensions also means it consumes less power, so I haven’t really noticed much different in terms of how often I have to charge it.

Moreover, the OnePlus X display is OLED, meaning it may conserve some juice by only lighting up the parts of the screen that are needed for a specific task, such as receiving alerts. And because the device has the quad-core Qualcomm Snapdragon 801 processor, it’s less powerful than the OnePlus 2, so this, too, may help save battery.

With normal use — e.g. no watching movies or streaming albums, etc. — I got a day (wake-to-sleep) out of the OnePlus X on a single charge. If I thought I’d be out late at night (into the wee hours), I would give it a boost during the day to ensure I’m not without Google Maps on the way home. In short, the battery is not spectacular, but it’s not awful, either.

When assessing how “good” a phone is, you have to measure the specs and performance against the price. For $250, there’s no doubt the OnePlus X is a steal. Sure, it’s not a workhorse — if you need a phone for shooting, editing, uploading, and broadcasting short films, look elsewhere. This phone is a mass-market phone for those who want something that looks great, feels “premium,” and does most of their everyday tasks well.

I’ve encountered so many people who own a top-of-the-range smartphone — be it an iPhone 6 Plus or a Samsung Galaxy — but all they ever do with it is use Facebook, WhatsApp, browse the Web, take photos, and make the occasional telephone call. Such flagships may be marginally faster and more efficient at those types of tasks, but to most people the difference will be negligible. Certainly not worth paying the additional $500+ for.

The OnePlus X is the kind of device you’d maybe buy as a present for a parent / son / significant other who doesn’t desire the highest-spec’d device on the market. Most people’s first impressions when unboxing the OnePlus X will be “wow, that’s a beautiful phone.” And when they start using it for all their day-to-day activities, few will be disappointed.

“We don’t see it as a mid-range device, or a low-end device, just because it’s a little bit smaller and cheaper,” said OnePlus’s Carl Pei in an interview with VentureBeat. “Normally, a low-end or mid-range device would run a Snapdragon 400 or 600 series (processor), and would not be built of glass and metal. In terms of the build and design, it is a flagship phone.”

I might not go so far as to call this a “flagship” phone. It’s certainly a very good phone — I’d even go as far as to say it’s more than a mid-range device. If someone can create a category that nestles in nicely between “mid-range” and “flagship,” that’s where we’ll put the OnePlus X.