comScore has just released its April analysis of online video consumption in the United States and once again, the market is expanding and Google’s dominance continues to grow right along with it.

The numbers below make this clear: 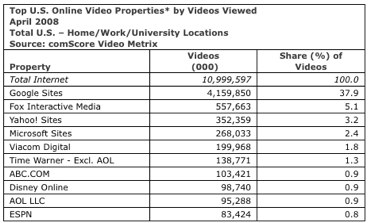 In March, Americans watched 9.8 billion videos, down from a high of 10.1 billion in December of 2007. (coverage)  Google’s properties, YouTube and Google Video (almost entirely YouTube), accounted for approximately 3.63 billion, or 34.3%, of those views, with Fox Interactive Media (led by MySpace) far behind in second place, with around 584 million, or 6%.

Overall, almost 3/4ths of Americans with Internet access are now consuming online video, spending an average of 228 minutes doing so per month. One small but fascinating statistic is that the average duration of an individual online video was 2.8 minutes, suggesting that attention span shrinkage is not at all limited to the written word.