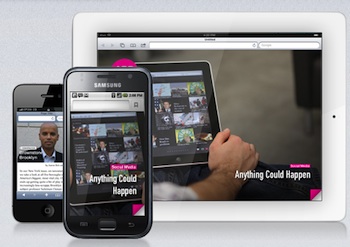 OnSwipe, the tablet publishing startup that plans to launch later this month, just announced that it has raised $5 million in its first institutional round of funding (aka the Series A, or as OnSwipe calls it, “Series Awesome”).

You can read about some of the general principles behind OnSwipe’s platform here. The New York City company says that with its technology, “anyone can be a publisher”. It’s supposedly ridiculously easy to set-up: Customers just choose their content source, choose a design template, and publish. OnSwipe has already announced a partnership to customize WordPress blogs for tablets. Not that the company is limited to blogs — it also supports social networking services like Twitter and Instagram.

The round was led by Spark Capital with participation from Lightbank, Yuri Milner, Lerer Ventures, Ron Conway’s SVAngel, Betaworks, Morado, Eniac, and Thrive Capital. OnSwipe says it raised the funding only a few months after its seed round because there’s a bigger opportunity than its founders originally thought, and because it wants to recruit top engineers.