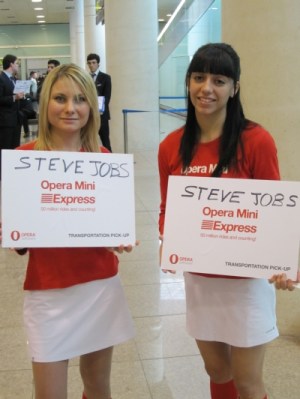 Opera Software has never been one to shy away from publicity. And now that the company has to somehow convince Apple to approve its new Opera Mini iPhone application, we’ll likely see many more stunts like this one: Opera hired these two ladies to greet attendees after they arrived at the airport for the Mobile World Congress.

It’s another clever ploy to grab Apple’s attention — the first being that Opera knowingly developed an iPhone application that went against Apple’s rules, and then held a demo of the forbidden app at the MWC.

While Apple allowed for third-party browsers on the iPhone a year ago, alternative browsers still need to use the WebKit framework (which is also used by Safari) to be approved. Opera Mini is based on Opera’s proprietary web browsing engine, so it’s a no go with the current rules.

This has led many to conclude that Opera developed an iPhone version of Opera Mini with the hopes that it will be able to shame Apple into opening up its third-party browser rules. When I previously asked an Opera rep about their plans to get on the App Store, they replied, “We hope that Apple will not deny their users a choice in Web browsing experience.”

More so than cute stunts like this, Opera needs to impress the tech community with Opera Mini so that they end up pressuring Apple to be more open to competition. This situation harkens back to one of John Gruber’s top ten issues with Apple involving the App Store. Referring to the rejection of the Google Voice app, he said, “It should only be about quality control, not competition control.”

Apple’s refusal to allow non-WebKit browsers on the iPhone is definitely a matter of competition control. Given how much some are praising Opera Mini’s speed, I don’t think Apple can afford to lock out innovation like this from its platform for much longer.

Opera Software is based out of Oslo, Norway, and is publicly traded on the Oslo Stock Exchange under the ticker OPERA.