Opera Software today launches a stable version of its desktop browser with a native ad blocker built directly in. But for those tethered to mobile, there’s even better news — the Norway-based company is also bringing the technology to smartphones via its Opera Mini browser for Android.

Today’s news comes two months after Opera became the first major browser brand with a built-in ad blocker, though the feature has hitherto only been available through the developer version of the software. By blocking intrusive and cumbersome ads at the source, this promises faster-loading Web pages, and — in theory — more secure Web browsing. But the flipside is that online publishers will take a hit, as they rely on ads to operate. 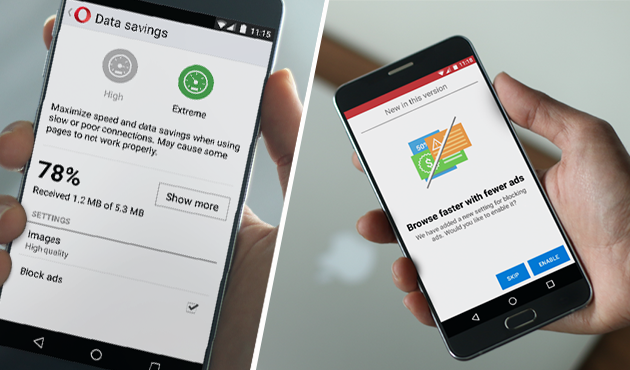 Opera may not always garner the same headlines as Chrome or Firefox, but the browser counts 60 million users on the desktop and more than 100 million people on Opera Mini each month. The company, founded in 1995, agreed to a $1.2 billion sale to a consortium of Chinese firms back in February.

Opera’s push to differentiate isn’t limited to ad blockers. Last month, the company rolled out a free, unlimited virtual private network (VPN) incorporated in its desktop browser, a result of its acquisition of VPN startup SurfEasy in March 2015. In both cases — with the ad blocker and VPN — Opera circumvents the need to install third-party extensions or add-ons.

“Opera is the first browser company to offer a native ad blocker across devices,” said Lars Boilesen, Opera CEO. “We do this because we want to provide people with the fastest browsers in the market. Our speed test shows that online ads slow down the browsing experience. Now, with Opera, you can browse a lot faster than, for example, in Chrome.”

It’s worth noting here that although Opera provides ad-blocking technology in its browser “out of the box,” it’s not switched on by default — you have to go into the settings to switch it on.