European technology titan Opera Software is today launching a virtual private network (VPN) client for iPhones and iPads. This launch comes three weeks after the announcement of such a feature for its desktop Opera browser.

With Opera VPN for iOS, the Norwegian company — which is being acquired by a consortium of Chinese firms for $1.2 billion — brings a completely free and unlimited VPN to iOS, letting users bypass geo-restrictions for online content, circumvent firewalls, block ads, and thwart ad-tracking cookies. It’s the result of Opera’s acquisition of North American VPN SurfEasy last March.

When the VPN / proxy arrived in the developer version of Opera for desktop a few weeks back, it only supported three “virtual locations” — the U.S., Canada, and Germany, but with the iOS launch, you can now pretend to be in Singapore and the Netherlands, too. It also supports English, Arabic, French, German, Indonesian, Japanese, Portuguese, Russian, and Spanish.

The Opera VPN app is toggled to “off” by default, but you can turn it on manually within the “Settings” menu, where there are two additional options to block ads and ad-trackers. 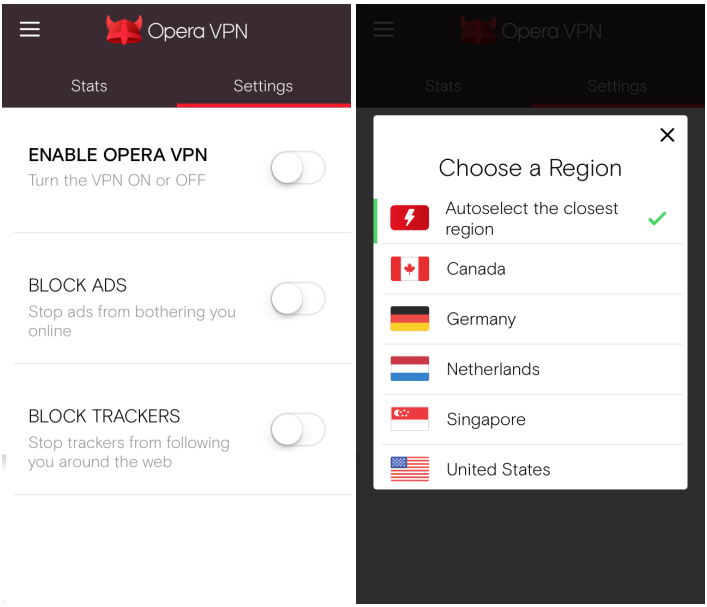 While there are many third-party VPNs out there already, such as perennial favorite TunnelBear, they typically require payment to unlock unlimited access. Opera’s hoping that its existing brand recognition in the online browsing realm — as well as completely free and unlimited access — will help it gain traction. But this also raises questions about what’s in it for Opera — why go to the trouble of building a VPN app when it doesn’t generate any money? According to a blog post from SurfEasy, the company collects “anonymous data about how people use their mobile devices” and sells it to third-parties who are “interested in better understanding the mobile ecosystem and how it’s evolving.” The post also says that Opera will likely monetize the app through ads in the future.

Anyone who is super paranoid about being tracked online will feel safer using an existing service that charges a fee. But among those who are simply seeking access to a service that’s banned in their country, workplace, or on their college campus, Opera VPN will likely find some fans. “With the new Opera VPN app, we help people to break down the barriers of the Web and enjoy the Internet like it should be,” said Chris Houston, president of Opera division SurfEasy.

VentureBeat tried the Opera VPN out with Netflix, one third-party service famous for geo-restricting content, but unfortunately, the VPN didn’t work, probably because the video-streaming company has been pushing to block VPNs at the request of the rights holders.

Opera’s effort to differentiate from other Internet browsing companies isn’t limited to VPNs. Just last week, it announced the full launch of its built-in ad-blocker for its desktop app, alongside a new version for Android phones. The company says that the Opera VPN will be landing on Android soon, too.