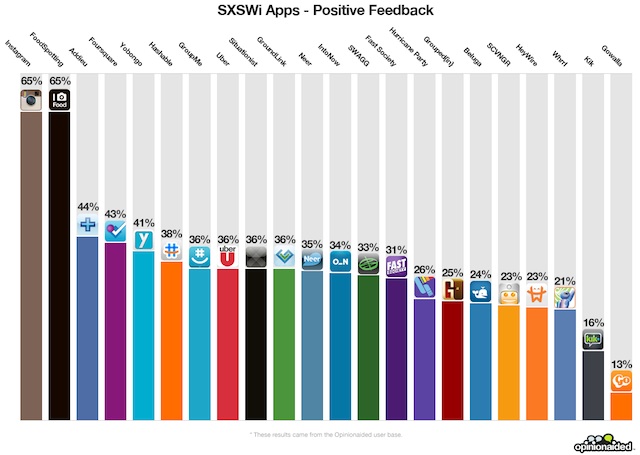 Plenty of writers have weighed in on who was the true winner at the South by Southwest Interactive conference, which wrapped up in Austin last week. Now the team behind a mobile question-and-answer app called Opinionaided is joining the debate.

How did Opinionaided choose the most popular apps at SXSW? It asked its users about their impressions of each service. Now, this methodology may seem a little weird to you (it does to me), because this was not a survey of SXSW attendees. Instead, the Opinionaided team looked at the apps that seemed to be getting the most buzz at the event and asked its own user base their opinion of each app. A company spokesman told me the goal was to see “which apps at SXSW resonated with app users not necessarily part of SXSWi’s demographic”.

Is that actually valuable to gauge an app’s success? Maybe not (download numbers at the conference, and information about how many of those downloads converted to regular users, would be more useful) but hey, it’s interesting. And according to the Opinionaided community, photo-sharing app Instagram and food-recommendation app Foodspotting stood head-and-shoulders above the rest, as you can see in the image above.