Though tech companies promise that 5G cellular devices will transform society, many of the technology’s “new” applications sound somewhat familiar. But a just-announced collaboration between Chinese camera phone vendor Oppo and U.S. chipmaker Qualcomm promises something we haven’t seen before: live 3D video calling that leverages a depth-sensing camera and a fast 5G modem. More impressively, Oppo says it will be available in “approximately six months.”

Picture a FaceTime or Skype call where you and your immediate environment appear in 3D rather than 2D, enabling your caller’s perspective to shift based on their viewing angle. Oppo plans to achieve this by combining the high-speed 3D scanning capabilities of 3D structured light cameras with high-bandwidth, low-latency 5G mobile connections to constantly stream 3D views between devices. 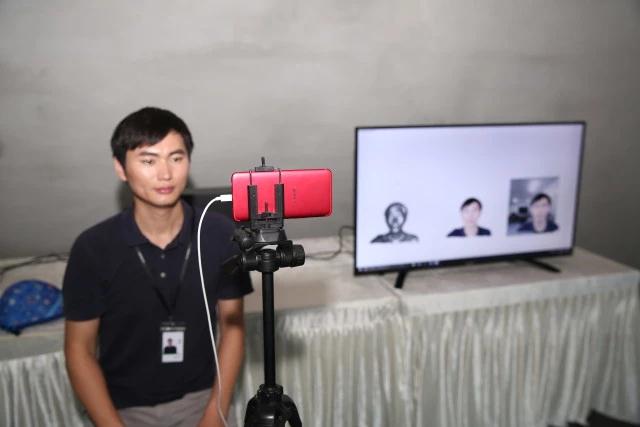 Above: Oppo and Qualcomm demonstrate a live 3D video call over 5G.

Oppo and Qualcomm demonstrated the technology live yesterday in Shenzhen, China, completing what they called “the world’s first 5G video call demo using 3D structured light technology.” The prototype device was a modified Oppo R11s containing a depth-sensing camera that collects “the color and 3D depth information of the target object by using RGB and the structured light camera of the phone.” That data was then sent over a 5G connection to a receiving tablet.

The roughly six-month timeline for deployment suggests that Oppo plans to include its 3D structured light camera and 3D video calling system in its first 5G smartphone, which is expected to debut in early 2019. Also interesting: Oppo suggests that this is part of a push toward devices supporting “UR” (Ubiquitous Reality), an offshoot of virtual and augmented reality focused on 3D and 5G technology-enabled telepresence. Whether this catches on in Oppo phones remains to be seen, but as depth-sensing cameras and mobile processors become faster, 3D Skype and FaceTime 3D are increasingly easy to imagine.