Orbotix took the robot toy world by storm when it launched its Sphero rolling sphere in late 2011. After adding a revamped version last summer, it’s now unveiling its new Sphero 2B today with the newest connected toy — and it looks like a weightlifter’s dumbbell.

The Boulder, Colo.-based company unveiled the new smartphone-controlled digital toy at the Consumer Electronics Show in Las Vegas. The new version of the Sphero should appeal those who want to have an augmented-reality driving experience with their remote-controlled robot toy, said Orbotix chief executive Paul Berberian in an interview with VentureBeat.

The device should debut during the fall of 2014 — and sell for under $100. Berberian said the first two devices saw a huge revenue increase in the company’s second Christmas selling season, with overall revenues to date well above $10 million. Berberian said the company is making its devices in the hundreds of thousands now, and Sphero and Sphero 2.0 are being sold in more than 70 countries now, compared to seven a year ago. The Spheros have rolled a quarter of a million miles, collectively.

“This is an emerging category of digital toys, and it’s not going away,” Berberian said. “We were overwhelmed with how successful it was and realized we were on to something.”

The new device has new artificial-intelligence smarts for its driving. The app-controlled Sphero 2B robots are programmable, enabling creation of custom apps. Kids as young as 7 are learning to program thanks to the device. 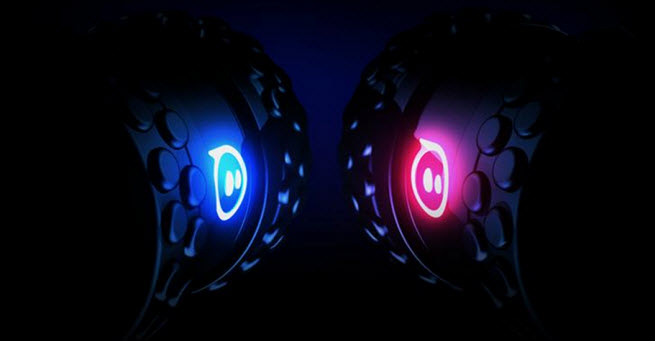 Above: The Orbotix Sphero 2B has interchangeable wheels.

Berberian founded the Orbotix with Adam Wilson and Ian Bernstein. The company went through the TechStars accelerator program in 2010 and received its first round of funding at that time. The goal was to move the world of toys from plastic to the digital realm. Berberian’s team of mathematicians and robotics experts wanted to inspire kids through open play with smart devices. Orbotix has raised $17 million and has 38 employees.

The first Sphero was a rolling ball with an ARM processor and a smartphone-controlled system. It used A.I. and robot-controlled motors to roll in an efficient manner. Cheap knock-offs have hit the market, but they don’t move in the same way that Sphero can, Berberian said.

“It has a pretty powerful form of locomotion,” he said. “It moves as fast as you can sprint, and it can do tricks and tumbles.”

The device had a wider demographic following than most geek toys, as 30 percent of the customers are women. Berberian said the product targets the “tech forward” family with a lot of smart devices, like the young clan that wants to take it for a walk with the dog.

The 2B has interchangeable parts and smart accessories. It runs on the same A.I. Superdrive capabilities as its predecessors. Berberian said that the different versions share 80 percent of the same components, but the software has gone through a big overhaul.

“It is really fast,” with speeds up to 14 feet per second, Berberian said. “It can turn on a dime. You don’t expect it to move fast, but it hauls ass.”

When it goes around corners, it can drift. That means players can develop driving skills with the 2B. It has a battery life of about one hour, and Berberian said he drove it uphill for 45 minutes and it still didn’t run out of juice. It has dynamic machine-learning, so it can learn via feedback how to better control its traction over a variety of surfaces. It corrects itself as much as 400 times per second. It has sensors that detect its position and motion and two motors.

2B comes in black or white. Its shell is made from a durable polycarbonate material. The wheels, tires, and hubcaps are interchangeable. It has Bluetooth low-energy connectivity and works with both iOS and Android devices. More accessories and customizable parts will be revealed later. The 2B supports 14 different programming languages, from Objective C for the iPhone to Unity for game development.

The apps developed for the device can include augmented reality animations that insert animated characters into the screen of your smartphone’s camera.

“2B looks and drives like it’s something from the future,” said Orbotix cofounder Ian Bernstein. Berberian added, “Google’s entry into this space of robotics validates it. You’ll see a lot of innovation ahead as people realize they are carrying around supercomputers in their pockets that can augment the smarts in a digital toy.”

As for the company’s own future, Berberian said the company is trying to stay on an annual refresh cycle.

“The goal is to be more like a consumer electronics company, creating a brand around the Sphero experience and coming up with a family of products around open-ended, connected play,” Berberian said.

The original Sphero sells for $129, but the goal with 2B is to sell it for under $100. Over time, the company hopes to cut out more costs.

“The magic of robotics is really fascinating,” Berberian said. “We are making robotics affordable. No one can afford a $10,000 humanoid robot.” 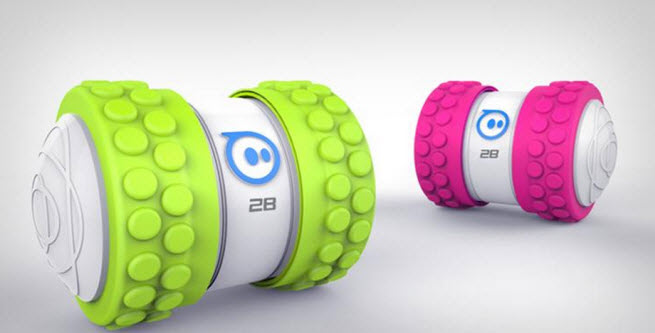 Above: Orbotix Sphero 2B can turn on a dime.