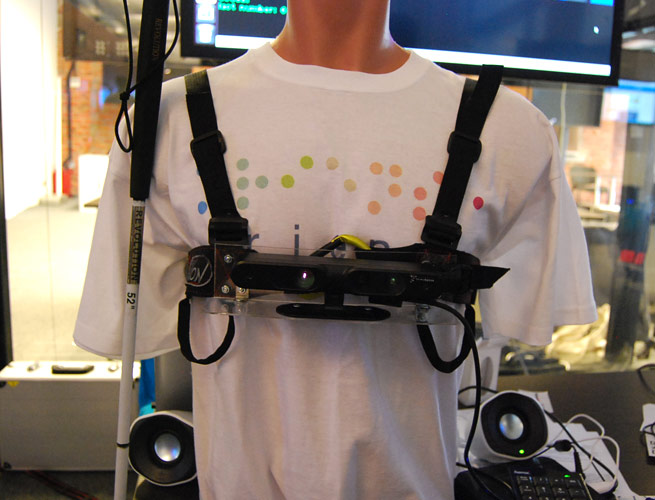 MOSCOW — After working for several years to give robots the ability to see and detect objects, the founders of St. Petersburg-based Oriense logically decided to bring their promising tech to humans.

Oriense started development last November and combines a Primesense sensor (similar to Microsoft’s Kinect camera) with its own software. This software scans what is being detected by the sensor and gives voice notifications about where objects are when objects are directly in someone’s path.

“This is about safety and helping the visually impaired,” Oriense co-founder Konstantin Zhukov told VentureBeat. “We think it will work best when someone uses both a walking stick and the sensor. But (as it gets more advanced), we think it could potentially replace a walking stick.”

The company only has a rather heavy prototype done at the moment, but the prototype does work well when paired with a walking stick. Two of the founders showed it off on stage at DEMO Europe and then showed it to me later the same day. Anyone who wants to use it straps the camera to his or her chest, holds a small computer in their hand, and plugs in an earbud in a single ear. 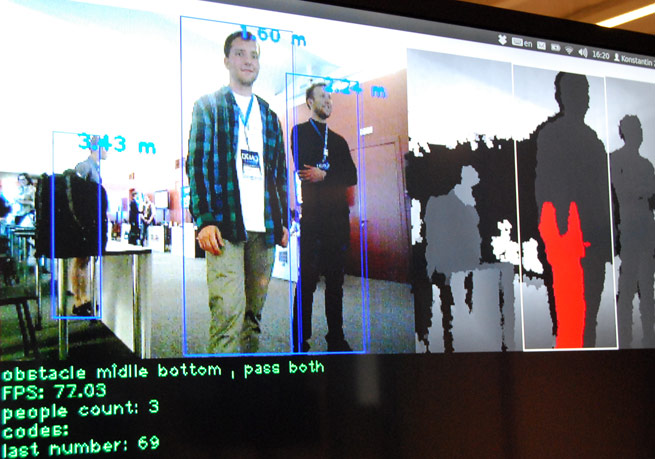 Oriense says this style of unit will first be on sale with a Primesense camera and one-pound computer in September.

But even as it launches the first kind of unit, the company is working on a second version that gets rid of the Primesense camera and uses its own camera sensor. Ideally, this camera will be lighter and less bulky than what you see in the top picture.

Zhukov told VentureBeat that this second unit should be available “in six months.” At first this unit will be available in Russia, but then Oriense plans to branch out to other parts of the world, including North America.

Oriense has raised $20,000 in pre-seed funding to date. Check out the short video to see the company’s prototype in action: