It might not be long before we’re charging smartphones without wires, pads, docks, or adapters. To that end, Bellevue, Washington-based Ossia revealed today at Mobile World Congress (MWC) in Barcelona that it’s working with Spigen, a phone accessory maker headquartered in Irvine, California, to develop a range of power-at-a-distance transmitters compatible with products in the former’s Cota ecosystem.

“True wireless power is a transformative concept, just as the ability to transmit data wirelessly changed the way we live and do business,” Spigen CEO Daeyoung Kim said in a statement. “We look forward to joining forces with Ossia to develop and mass-produce a line of consumer-friendly transmitters to keep customers’ phones charged up at home or at work.”

The announcement comes a month after the two companies pledged to collaborate on a wirelessly charging smartphone case. Ossia CEO Mario Obeidat told VentureBeat at the Consumer Electronics Show (CES) in January that when the case launches sometime this year (alongside the Spigen-designed transmitters), it will first support Apple’s iPhone lineup and will look something like Ossia’s proof-of-concept Forever Sleeve, which packs a battery that can receive power over the air.

“By teaming up with Spigen to create Cota-enabled phone sleeves and a Cota power transmitter, we’re one step closer to bringing true wireless power to consumers,” said Doug Stovall, chief revenue officer at Ossia. “The idea is that consumers in an office or in a conference room will be able to set their phones down for one, two, or three hours, and when they pick them up again, they’ll be fully charged. Our goal from the beginning is that every smartphone will be wireless power.” 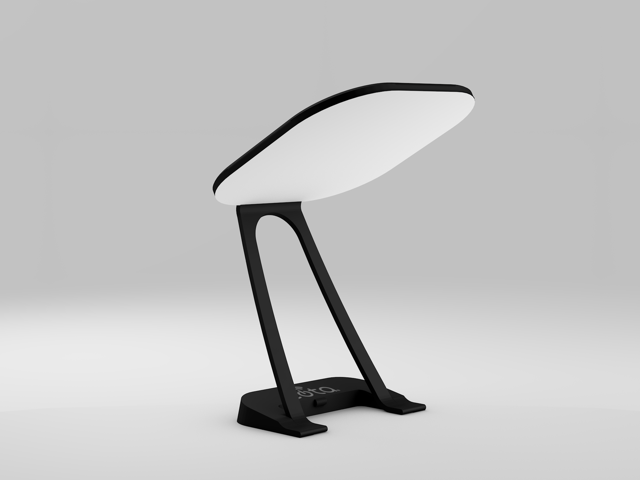 Ossia and Spigen didn’t have physical transmitters on hand at MWC, but they were willing to share photos of a mockup ahead of today’s news. The minimalist, monochromatic form factor — which they caution hasn’t been finalized — appears to have roughly the same thickness as a typical Qi pad (but slightly more surface area than), with two legs connected to a U-shaped base that raise it above the desktop surface on which it’s seated. There seems to be some sort of light source embedded in the transmitter base, judging by one of the press renders — perhaps to indicate when it’s powered on.

If you aren’t familiar with Ossia’s Cota platform, here’s a quick primer: Unlike most “wireless” charging tech on the market, Cota doesn’t require line-of-sight access. Instead, it uses thousands of antennas embedded in transmitters that communicate with compatible transceivers. When a device starts running low on power, those antennas emit microseconds-long beacon signals that reflect off walls, furniture, and other obstacles until they reach a transmitter, which triangulates the beams to pinpoint the transceiver’s location and then sends power along those paths.

Cota’s first-generation transmitter could send about 1 watt to a smartphone sitting 3 to 6 feet away, while its Cota Tile product could charge devices up to 30 feet away (or 50 feet, with two transmitters working in tandem). Cota 5.8GHz, which was announced at CES 2019, is much improved; it’s able to deliver roughly 4 times greater power with a same-sized transmitter and receiver antenna. And because it operates in the 5.8GHz spectrum, as the name implies, it’s less susceptible to interference from surrounding wireless signals.

Ossia has raised more than $35 million, to date, and its growing list of partners includes Walmart, which last year said it would work with Ossia to help cut costs in its thousands of brick-and-mortar stores. But Ossia has plenty of competition. Powercast, a startup founded in 2003, has an at-a-distance wireless power system that’s available in the form of a development kit. And Energous is commercializing transmitters that can send power through the air to devices up to 15 feet away.

Ossia is no newcomer to at-a-distance charging, though. Roughly a decade ago, the company developed its first wire-free, over-the-air transceiver that could beam electricity to devices anywhere within range. In the years that followed, it has released kits that include a wirelessly powered AA battery replacement (the Forever Battery), licensed designs to antenna companies, built out a cloud-hosted management platform, and recruited ecosystem partners like Displaydata, Molex, and Motherson.