The Osterhout Design Group, which has been making high-end night-vision goggles for years, has begun shipping its R-7 augmented reality glasses for enterprise applications. The $2,750 smartglasses are a sign of things to come, as the company eventually hopes to bring the technology to the masses at consumer prices.

Augmented reality is expected to become a $150 billion market by 2020, according to tech advisor Digi-Capital. But first, it has to become cheaper, lighter, and otherwise more practical. The R-7 represents ODG’s best trade-off between capability and cost. The company is showing the R-7 at the 2016 International CES, the big tech trade show in Las Vegas this week.

The ODG R-7 shows heads-up display images on the inside of the lenses, so you can see stereoscopic 3D or other animated imagery on top of objects in the real world. The company is targeting applications in health care, energy, transportation, warehouse, logistics, and government.

“This gives you all the performance of a tablet in a hands-free interface,” said Pete Jameson, COO at ODG, in an interview with VentureBeat. “We’re starting to see some real momentum here.”

A year ago, ODG was trying to target a $1,000 price for the R-7. But after showing it at CES 2015, the company shifted into the enterprise and industrial markets for its next model.

“We had some soul-searching to do,” Jameson said. “Do we try to do a consumer-based product at $1,000, or do we take a right-hand turn and follow up on the industrial opportunity? The latter is what we chose to do.”

The $2,750 means that the device is robust and can be used in rough environments. The R-7, which is shipping now, weighs just four ounces and has a Qualcomm Snapdragon 805 processor. It also has Wi-Fi, GPS navigation, and motion sensors.

ODG is showing off partners who are developing applications based on its Android-based ReticleOS software. Developers can create apps that run on ODG’s devices. Partners include Augumenta, which is making gesture control and navigation apps; Blippar, which is experimenting with AR visual marketing content; Dysonics, which is creating 360-degree audio; Medweb, which is monitoring vital signs in health care settings; OpTech4D, which is doing work for oil and gas companies; Paracosm, which is enabling 3D mapping; Scope, which is enhancing maintenance functions; and Vital Enterprises, which is providing telepresence and remote assistance. 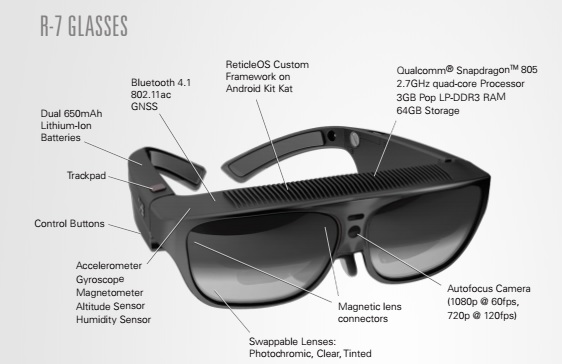 Above: Details of ODG’s R-7 smartglasses.

“You’ll see some very cool consumer verticals hit the market,” Jameson said. “We’re going to see an industry inflection point for AR this year. As we get into 2016 and 2017, we’ll see business-to-business categories become very useful.”

ODG did a well-received demo with BMW at the Shanghai auto show in April 2015, and it has a partnership with Paramount as well.

“We have an eye on the consumer marketplace, but we are not ready to announce anything today,” Jameson said.

Ralph Osterhout, CEO and founder of ODG, started the company in 1999. He was the designer of the PVS-7 Night Vision Goggles for the military, and he also created heads-up displays in scuba masks. He was passionate about wearable tech long before it became fashionable.

“It’s hard to overstate the impact head-worn computing will have on all walks of life,” Osterhout said in a statement. “I believe we’re going to see the R-7 transform enterprise and industrial markets and use cases — potentially even spawning new industries. And this is just the beginning in terms of wearable immersive functionality, as you will see with our highly immersive wide field of view technology demonstration at CES.”

The San Francisco-based company spent six years and $60 million refining its military technology for other uses. It has about 85 employees.

“Augmented Reality has proven to be a force of change and growth in the technology market, with smartglasses leading the charge,” said Eric Abbruzzese, research analyst for ABI Research, in a statement. “ODG’s R-7 glasses promise to be a top performer in the space, with powerful hardware specifications backed up by a strong customer base and a number of auspicious verticals to serve.”

Here’s a video of NuEyes, an app that works with the R-7 smartglasses.