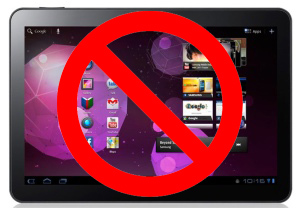 A German court on Tuesday granted Apple a preliminary injunction that blocks the sale of the Samsung Galaxy Tab 10.1 in the European Union, excluding the Netherlands. The move comes just a week after Apple halted sales of the Galaxy Tab 10.1 in Australia.

“Stopping sales is an unmitigated disaster,” Avi Greengart, a research director at Current Analysis, told VentureBeat. “It’s certainly going to make things a lot harder to compete if you can’t ship your product.”

Samsung did not provide an official comment on the news.

Apple asserted in German court that Samsung’s tablet had imitated the iPad so closely that it infringed on Apple’s intellectual property rights. The court agreed with Apple. The injunction means Samsung could face up to a $350,000 fine or imprisonment for Samsung’s management team for any violations.

It’s unclear whether Apple’s claims against Samsung and Android will work as well in the U.S. and other parts of the world as well. FOSS Patents’ Florian Mueller wrote that the German courts are much stricter when it comes to intellectual property than in the U.S.

The news is a continuation of Apple’s legal squabbles with Samsung, which started in April with a lawsuit in the U.S. concerning the company’s Galaxy Android smartphones and Galaxy Tab. Apple argued that Samsung’s devices heavily imitated the iPhone and iPad. Samsung filed a counter-suit against Apple, but the battle also extended to the U.S. International Trade Commission, which can block the importation of devices into the U.S.

What do you think of the battle between Apple and Samsung? Do you think Apple is in the right to block the Galaxy Tab 10.1?

Update: Samsung on Tuesday evening sent the following statement concerning the barring of the Galaxy Tab 10.1 in the EU:

Samsung is disappointed with the court’s decision and we intend to act immediately to defend our intellectual property rights through the ongoing legal proceedings in Germany and will continue to actively defend these rights throughout the world. The request for injunction was filed with no notice to Samsung, and the order was issued without any hearing or presentation of evidence from Samsung.

We will take all necessary measures to ensure Samsung’s innovative mobile communications devices are available to customers in Europe and around the world. This decision by the court in Germany in no way influences other legal proceedings filed with the courts in Europe and elsewhere.