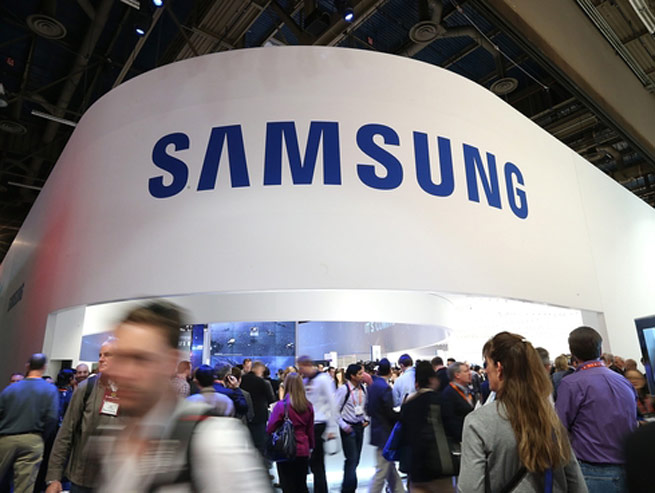 Samsung now leads in consumer loyalty in most of the consumer electronics categories it competes in … including arch-rival Apple’s former territory: laptops and smartphones.

For laptops, Samsung and Apple were tied, according to the Brand Keys’ 2013 Consumer Loyalty Engagement Index, released today. But Samsung led in flat screen TVs, and, in perhaps the biggest shocker, beat out Apple for consumer loyalty in smartphones.

“This is the first year that Samsung beat out Apple in smartphones,” Brand Keys president Robert Passikoff told me this afternoon. “When Apple was number one, everyone said, ‘Well sure, it’s Apple.’ But the fact is that Samsung always had a larger share of the marketplace.” 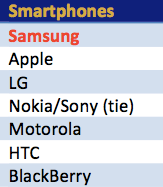 If you’re wondering whether this is just some dinky little no-name survey, think again. The Brand Keys customer loyalty index surveys 39,000 people, making it generalizable to the entire United States population with 95 percent confidence. And if you’re also wondering how big the delta between number one and number two actually is, Passikoff says there’s a “significant difference.”

“It’s not terrible to be number two,” Passikof said. “But in both cases I think consumers are looking for higher degrees of innovation. It was only after Samsung and other companies came out with smaller tablets that Apple brought out the iPad mini. It was only in reaction.”

Asus followed Samsung and Apple as the laptop vendor with the third-most-loyal customers, with Toshiba and Sony right on its heels. In smartphones, LG took third place after Samsung and Apple, followed by Nokia and Sony, who were tied for fourth. Motorola, HTC, and BlackBerry rounded out the top eight.

Amazon handed Apple some more bad news in the e-reader category, leading the field with its Kindle tablet. Barnes & Noble’s Nook took second, with Apple, Kobo, and Sony following. One big caveat here: it’s likely consumers don’t think of the iPad as an e-reader first and foremost, but rather as a general-purpose tablet, which may have affected these rankings.

I asked Passikoff about exactly that: 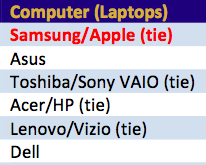 “That’s absolutely so. When we initially added the category, iPad never showed up. And then later it did … its primary product value is not as an e-reader. But we don’t define what products go in which categories: consumers do.”

But, adding injury to insult, Amazon beat out Apple in the dedicated tablets category as well. Apple and Samsung tied for second in that category, followed by Barnes & Noble in a tie for third, and Acer, Lenovo, and Toshiba in a tie for fourth. Google showed up in the tablets category, also in a tie, in fifth place with Sony.

Clearly, consumers are a little confused about what is a tablet and what is an e-reader — a rapidly disappearing difference — and that confusion played a role in Apple’s rankings. But just as clearly, Samsung’s products, innovation, and advertising are helping that company shape an extremely positive reputation.