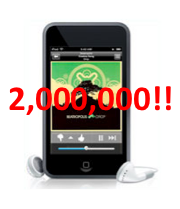 Late last night, Apple unveiled its new iTunes 2008 section of the iTunes store showcasing the best of what the store offered this year. The area dedicated to the App Store shows the apps that have been downloaded most. So what was the top app of the year? Pandora Radio, built by Pandora, the Internet streaming radio service.

So just how many times has it been downloaded? Many app developers try to keep exact numbers private, but as fate may have it, Pandora just happened to hit a milestone on the day it was crowned top app of 2008. This morning, it nabbed its 2 millionth user, a post on Pandora’s blog confirms.

That number is really pretty staggering considering that the App Store has only existed since July 11 of this year. But just as I wrote back on July 10 (some of us sneaky iPhone addicts got access to the store a day early), it’s a brilliant app — still easily one of the best all these months later.

The app has evolved some since its launch. Most notably, it now has overlaid advertisements that show up while you are streaming music. The ads are pretty small and unobtrusive. You can even click to minimize them if you wish.

Pandora founder Tim Westergren told me back in September that he was amazed by the application’s growth on the iPhone. At that time, he said they had over a million users, so it would seem the app is being downloaded as quickly as ever. Its inclusion at the top of the iTunes 2008 app section should increase that dramatically as well.

It’s been a tough year for Pandora, which had to fight off an increase in internet music streaming royalty rates, and lay off 20 employees back in October due to the troubled economy. But having the top application of all time on what is maybe the hottest device out there right now has to be some consolation.