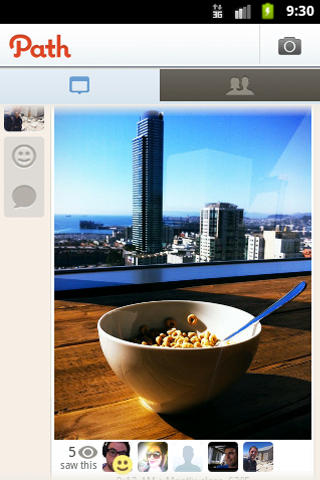 “Personal network” app Path has broken out of its iOS prison and is now available for Android, the company announced on its blog today.

While the free Android app is still a beta release, meaning it’s not completely finished yet, it’s an important move for a company that’s known for its iOS exclusivity. But with much of Path’s launch hype from seven months ago dying down, I wonder just how many Android users have been eagerly awaiting the app.

Path was co-founded by Napster creator Shawn Fanning, former Facebook exec Dave Morin, and Dustin Mierau and started out as simple a photo sharing app for your 50 closest friends and family (your “personal network”, as the company calls it). It has since added other features like chat, video sharing, Stacks (a way to neatly organize shared items), and cute emotions for posts. Path also released its first “short” earlier this month, With, an app that lets you easily advertise who you’re hanging out with and share photos on Twitter.

The Android app seems to include most of the core features from Path’s iOS app, although for some reason it doesn’t allow you to delete posts.

Path has yet to disclose any user metrics, likely because the app isn’t focused on attracting many users in the first place, since it’s all about your personal network. In February, the company announced that it had reached 2 million shared moments, an impressive milestone that came alongside a fresh $8.65 million funding round from Kleiner Perkins and Index Ventures. The company also famously turned down Google’s offer to acquire it for $100 million late last year.

In addition to its most recent funding round, Path previously raised $2.5 million from Index, First Round Capital, Founders Fund, and a number of angel investors.