The good news, if you’re PayPal, is that almost three quarters of Americans know about you and your digital wallet solution. The bad news is that under half of them really understand what a digital wallet is.

No digital wallet vendor besides PayPal has even 50 percent awareness. Forty-one percent of Internet-using Americans have heard of Google Wallet, but only 13 percent know about MasterCard’s PayPass wallet, and even fewer know about Square’s, Visa’s, or other vendors’ solutions.

If ComScore’s recently released digital wallet study highlights one thing, it’s that it is still the very early days for digital wallets. And that if you’re not PayPal or, to some degree, Google, almost no one knows what you’re doing.

“Low awareness, understanding of benefits, and availability among retailers are among the key barriers to adoption of digital wallets,” Andrea Jacobs, ComScore Payments Practice Leader, said in a statement about the 2,000-person study. 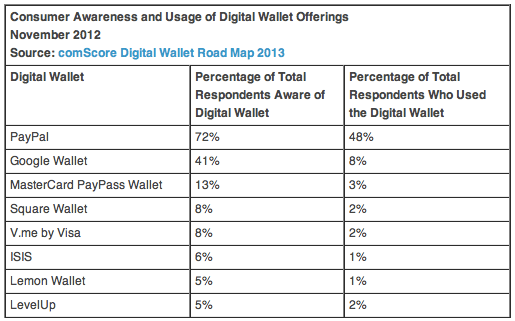 While half of respondents have used PayPal, only 8 percent have used Google Wallet. Three percent of American Internet users have tried MasterCard’s digital wallet solution, with the numbers going down from there for Square, Visa, Isis, Lemon Wallet, and LevelUp.

The problem is not just with use — it’s also with education. Unfortunately, digital wallet companies suck at explaining their product.

According to ComScore, most consumers just don’t really know what a digital wallet is and what benefits it can provide. And even after being shown websites of digital wallet vendors, people still showed an average comprehension of just 45 percent.

PayPal, of course, has a major advantage in that it has been the default go-to online payments option for online purchases not consummated with a credit card for over a decade, and the company is working hard to parlay that advantage into a dominant position in the mobile digital wallet space.

Google has made some major strides in the digital wallet space, but its intentions and plans are obscure, to say the least. The latest move for Google Wallet appears to be a morphing credit card that can be a Visa, MasterCard, or American Express card depending on how you want to pay, with some additional person-to-person PayPal-like capabilities. One huge advantage for the search and advertising giant, however, is that its brand awareness is sky-high, which was probably a major help in this survey and will be a major help as Google rolls out its solution more broadly.

While the digital wallet market seems like it’s PayPal’s to lose, the reality is that it is still very early days, and payments giants like MasterCard and Visa can release new solutions to hundreds of millions of consumers very, very quickly.