Waiting for your Pebble to drop? Rest assured the team is working around the clock and pulling out all the stops to get it done.

I just learned that Pebble’s lead designer, Steven Johns, is, according to my source, “stuck in Asia” working with Pebble’s manufacturing partners to get the product out the door. And he’s canceled a speaking appearance later in October, so he’s planning to stay there for some time. 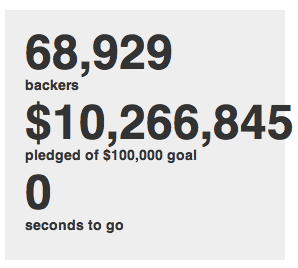 Above: Pebble raised so much money that they broke Kickstarter’s site (design).

Pebble is one of Kickstarter’s most successful crowdfunding projects ever, raising over $10 million from nearly 70,000 backers after setting a goal of just $100,000.

But the project is also a poster child for what can go wrong with crowdfunded projects. It’s been delayed multiple times — after an initial shipping date of September, the team has refused to publish a new projected shipping date, not wanting to overpromise and underdeliver.

The project has also been critiqued for lack of updates, which team leader Eric Migicovsky addressed today by showing a new version of the watch, new software and screen designs, and new apps (see his video update below).

In the video, Migicovsky says he’s just back from Taiwan. But designer Johns is still there, according to my source. Johns was scheduled to speak at Interface 2012, a digital health innovation conference in Vancouver, Canada, on Oct. 16-18.

(Here’s his speaker page on the conference organizer’s site.)

But that appearance has been canceled, as Johns will now be staying in Asia, working overtime to get Pebble ready for shipment.

What that adds up to is two to three more iterations before mass production.

But what it means for almost 70,000 project backers, hopefully, is a better quality, fully functioning watch when Pebble finally does ship.