Social networks built around location are a hot item, and getting hotter.

It’s one thing to have a group of contacts which you can update with words from a mobile device (think the micro-messaging service Twitter). It’s another to be able to quickly update your exact location on a map and have others see it. Add to that the ability to review places (think: Yelp) as well as tag places you would like to go, and you have a general idea of Whrrl, a location-based social network. 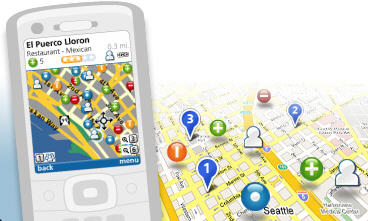 Several other services including BrightKite and Yahoo’s FireEagle, are exploring similar usage of location for networks, but with this new round of funding, Whrrl gets an important ally: T-Mobile. Deutsche Telekom’s venture capital arm, T-Mobile Venture Fund led this latest Series B round.

This location-based network arena will only get hotter as newer technologies and newer phones come into the market. While Google’s Android is still a little ways off, Apple’s 3G iPhone is expected to be just around the corner, and is expected to add GPS technology. Whrrl has already spoken on its blog about its excitement about building a native application for the device with the software development kit (SDK).

Pelago was the first company in venture capital firm Kleiner, Perkins, Caufield & Byers‘ portfolio to join Kleiner Perkins’ iFund, the $100 million fund which the firm set up to spur iPhone application development. Kleiner Perkins participated in both Pelago’s Series A round as well as this latest round. Other return investors include Trilogy Equity Partners and Bezos Expeditions. DAG Ventures is a new investor.

Loopt is yet another company doing something similar to whrrl, using GPS to update your friends’ location on a map. Loopt is backed by Kleiner rival, Sequoia.

As more and more phones add GPS capabilities, the ability to update Whrrl will get easier and easier. In fact, a user could use the service to send out updates of their location to friends without having to touch the device.

The Seattle, WA-based Pelago previously raised $7.4 million in 2006. We wrote about Whrrl in November.