The app world has taken over the great digital attention span, with the U.S. population now spending 52 percent of its “digital time” on mobile apps, according to a Comscore report. Crossing the 50 percent threshold is a pretty important milestone.

The Comscore report is filled with data that probably confirms what you already know: It’s harder to get somebody’s attention because they may be looking down at a mobile device, engrossed in the latest game or social post. Total mobile usage of digital media is now 60%, and mobile is still growing rapidly as a percentage.

In the past year, total time spent on digital media has increased 24 percent and mobile app use has increased 52 percent. U.S. users now spend an average of 7 out of 8 of their mobile minutes on an app, says Comscore’s “U.S. Mobile App Report.” 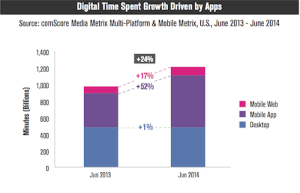 The desktop is not completely dead, however. As mobile grew, desktop mobile media consumption stayed static at 40% of digital time spent, according to Comscore. And desktop remains more of a workplace tool, with less time spent on social and gaming. (Editor’s Note: If you are interested in learning more about mobile apps, take our latest VB Insight survey on mobile app analytics, and you’ll get the data in return.)

What are people doing with all that mobile time? Mostly goofing off or entertaining themselves, apparently. The mobile app landscape is still dominated by social networking, games, and music. The social networking, games, and radio categories account for nearly half of the total time spent on mobile apps. This indicates that mobile remains more of an entertainment platform than desktop computing, according to the Comscore report.

VB Insight is studying mobile app analytics solutions.
Share your knowledge, and we’ll share all our data with you in return.

In terms of platforms, Android is still the top smartphone operating system, with 83.8 million U.S. smartphone subscribers, approximately 16.4 million more than than are using Apple’s iOS platform, according to Comscore. But because Android apps are distributed through so many different Orginal Equipment Manufacturers (OEMs), Apple remains the largest smartphone OEM with 67.4 million owners and 100 percent of the iOS market. 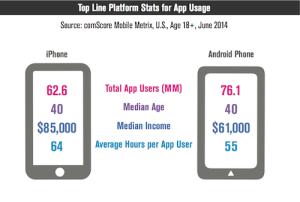 Apple users are richer, on average, as well. The median iPhone app user earns $85,000 per year, which is 40 percent more than the median Android phone user with an annual income of $61,000, says Comscore. And iPhone users are heavier users: They engage with their smartphone apps for nine more hours than Android users during any given month.

Facebook is the #1 app in terms of both audience size and share of time spent. Facebook, Google, Apple, Yahoo, Amazon, and eBay dominated the supply of the most popular mobile apps. These six brands account for 9 of the top 10 most used apps, 16 of the top 25, and 24 of the top 50.

You can find out more about the mobile habits of the U.S. population by downloading the report here.