I’m seated at a table in a downtown Toronto condo that’s been converted into the offices of Cordon Development Labs. In front of me is a man with an iPhone 6 strapped to his face. The phone is nestled in a bright-orange, 3-D-printed case that his team has designed. He is gesturing in mid-air using LED-encrusted “rings” on his index fingers.

The man is Milan Baic, president of Cordon. His product is called Pinć (pronounced “Pinch”), and as he waves his arms about like a blind man trying to touch the face of someone he can’t quite reach, I’m told that I’m looking at the future of mobile online shopping.

Baic believes that the problem with mobile commerce – specifically mobile retailing – is that smartphone screens just aren’t big enough for users to really get a sense of what they’re buying. The solution, according to Baic, is virtual reality. That’s where Pinć comes in.

Despite the VR label, warns Baic, don’t compare Pinć to Oculus Rift. The Oculus is a device which, Baic says, forces you to “wear this big thing on your head and […] sit down and plug yourself into a computer. You can’t use your hands to interact with the environment.” The Oculus doesn’t address what Baic sees as VR’s three biggest obstacles to widespread adoption: “Control, portability, and use case.”

Control — that relates to being able to use your body for interaction instead of being limited by a piece of hardware like a game controller. Portability is self-explanatory. Use case means that VR has to offer something beyond immersive game play in order for consumers to widely adopt it. 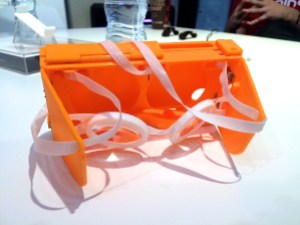 To solve for all three of these, Baic’s team has developed a product that is part hardware, part software. The odd-looking iPhone case and LED rings make up the hardware component and gives users the portability missing from purpose-built VR systems such as the Oculus Rift. Thanks to a set of aspheric lenses that are suspended about an inch and a half away from the iPhone’s screen, the case lets users see a VR landscape that is rendered in stereoscopic 3-D via split-screen by the software component: the free Pinć app. The product, which has been incubated by Cordon, will be developed by a new company called Pinć VR.

So is the Pinć like Samsung’s Oculus-powered Gear VR? Nope. “The Gear VR is a niche device, design for gaming with a gamepad. The large form factor combined with lack of focus on an actual software platform puts them in a different category,” Baic says.

As proof, Baic offers up the real special sauce in Pinć: the twin LED rings you wear on your fingers. Using patented technology, the Pinć app makes use of the iPhone’s rear-facing camera combined with a fisheye lens to track the green and red LEDs’ movement through space. Baic says the lens will be integrated and flush-mounted once the project reaches the production stage.

Built into the rings are clickable thumb pads that, when pressed, cause a third LED to illuminate. When the app detects the extra LED’s light, it interprets it as a click (no Wi-Fi or Bluetooth needed). These rings let you use your hands a la Minority Report instead of being reliant on a game controller, which satisfies Baic’s concern around control.

Baic is very committed to the idea of doing as little hardware development as possible. “We’re not a hardware company. Our primary focus is on software. We didn’t want to bring to market another set of electronics. What we wanted to do was repurpose what was already in people’s pockets,” he says.

As Baic interacts with Pinć, I’m able to see what he sees thanks to an external monitor that has been set up for the demo. Without the benefit of the stereoscopic separation created by the case, I’m left to view what he sees as a split-screen. 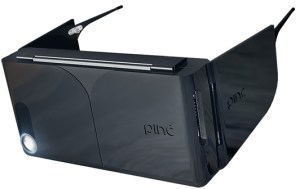 Above: The production version of the case will feature a flush-mounted fish-eye lens that gives the iPhone a wider field of view. Photo credit: Pinć VR

The Pinć app displays a floating UI that presents interactive elements on invisible planes. The effect is like standing inside an octagonal prism, with the available apps spread out horizontally, kind of like Android home screens. A set of navigation and system tools appear above and are angled slightly toward you. Where your feet ought to be, there is a virtual keyboard and compass.

Pinć makes use of the iPhone’s accelerometer to track your head’s movements in 3-D space. Though jerky and at times a little nauseating, it works. Your hands (or more specifically, your index fingers) are represented as two white circles that appear to move over the entire 3-D interface as though trapped between invisible layers of glass. While you can move your hands towards you and away from you, this movement in the Z-axis is not reflected inside Pinć. Clicking the thumb pads turns the circles red momentarily – this is your visual confirmation of a successful click.

If there is an equivalent control scheme outside of Pinć, it would be the use of the thumb and index finger on a touch screen: Clicking with either hand is the equivalent of tapping or tapping-and-holding, while clicking with both hands simultaneously delivers multi-touch gestures such as pinch-to-zoom-out. Incidentally, the squeezing or pinching required to activate the thumb pads is how Pinć derives its name.

While clever, and an excellent way to save on hardware costs, the camera+LED control solution has an infuriating side effect. Should the LEDs ever be twisted the wrong way so that the camera can’t see them, or if their brightness isn’t sufficient to be detected against whatever background your environment offers (a sunny day outdoors, as opposed to the preferable darkened room), Pinć simply can’t track their movements. During my brief time trying it out, I could barely get the system to recognize my movements or clicks. “You have to get used to it,” Baic says. He promises that the production version of the rings will be able to mitigate these problems through brighter LEDs that wrap their way around the entire circumference. Let’s hope so.

In the demo, Baic was able to navigate between the “home” screen, various apps such as YouTube and a mock-up shoe retailer, doodle within a basic drawing app, and zoom out to see the entire Pinć interface from a distance. Baic claims that there is “unlimited real estate within this platform,” which brings us to the inevitable topic of revenue and monetization.

Above: Video demo of the Pinć VR iPhone case and app, shot at Cordon Development Labs in Toronto.

Pinć VR has decided to offer the Pinć hardware and software at or below its cost, with backers of its Indiegogo campaign able to get their hands on the basic Pinć packages for $99. This will include the iPhone 6 or 6+ case, as well as a set of LED rings that can be housed inside dedicated slots within the case when not in use. The intent, of course, is to get Pinć into as many hands as possible in order to build up its user base quickly.

Baic claims revenue will come from two sources: advertising and retailing. The advertising component seems obvious, though Baic wasn’t willing to offer details on how or where the ads would be seen. But what’s more unorthodox is his plan for retailers.

Instead of charging a retailer such as Nike, for example, a flat fee for opening a store, a commission structure, or even a fee-per-SKU, Baic has made the unusual decision to charge retailers based on the physical dimensions of their virtual store. In other words, if the real-world equivalent of the Nike Pinć store were 2,000 square feet, that’s what Pinć VR would invoice Nike for.

In effect, this turns Pinć into a virtual shopping mall that has an unlimited amount of real estate to offer, but it charges its tenants as though there were a limit.

“There is something to say about scarcity,” says Baic. “Unlimited space is a good thing when you want to create something, but when you are in a commercial environment you want to create the concept of scarcity. I think that various brands would want to have various different sizes [of stores]. If you look at a first-tier brand like a Nike, they have a certain amount of square footage that they get for their stores. We feel that that’s the ideal way to create reality out of virtual reality.”

It’s not a model without precedent: Linden Labs’ Second Life charges its users for real estate within the virtual confines of the simulation, even though the Second Life platform possesses enough theoretical room to replicate the Earth’s entire surface area 140 times over. Unlike Second Life, where users own and can rent out or resell their real estate, stores within Pinć will be rental only. Baic was mum on how these rates would be calculated but suggested that much like in the real world, negotiation would play a role.

Presumably retailers willing to sign an agreement at the early stages would be given healthy incentives, while those that wait until the Pinć community has grown will see steeper rates.

To help retailers get set up within Pinć, Pinć VR is offering its services as a development house, but this is purely optional. The company plans to release an SDK (that will ship with the Indiegogo fulfillment), which would give a third party the ability to become a Pinć developer. Retailers who are very committed to the platform could easily hire their own in-house devs.

Assuming for the moment that big brands do sign on, these companies must shoulder an additional burden as virtual Pinć businesses: 3-D modeling. Pinć VR hasn’t mandated that all products in virtual stores be available as 3-D objects, but given that the interface is built with these objects in mind, shoppers would likely stay clear of stores that didn’t use them. So retailers would be on the hook for the 3-D scanning of their merchandise, or perhaps large businesses, such as Amazon or Walmart, may require that the manufacturer do the work.

Because VR is still in its infancy and because VR shopping is even more embryonic (Amazon’s pseudo-3-D Dynamic Perspective function in its Fire Phone notwithstanding), the added expense of creating decent 3-D models could be a deal-breaker. On the other hand, because of Pinć’s real-world real estate conceit, there would be far fewer 3-D models needed for each store because of the limited room.

The big, unanswered question with Pinć is, do consumers even want such an experience?

Surprisingly, Baic doesn’t have the answer. The Indiegogo campaign, which launches today, will be the first time for Pinć VR to test the waters and see how much enthusiasm exists for a portable, phone-based VR system.

If it fails, it will merely be the latest in a long line of solutions that went in search of non-existent problems.

If it works, it could be the biggest disruption in retail, entertainment, and communication since the Internet itself.