Pinterest is today launching its new Lens visual search tool to everyone on iOS and Android in the U.S.

First unveiled last June, the new Lens feature lets users snap a photo with their mobile camera, or use an existing image on their camera roll, to find themes and pins related to the photo. The feature arrived in beta early last month to a handful of users, and now, it seems, it’s ready for prime time. Well, almost. 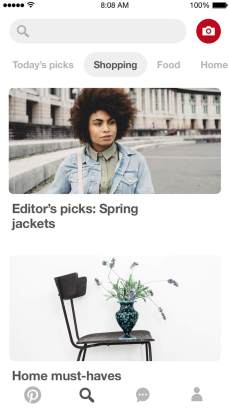 Using computer vision smarts, Lens can be a useful way of surfacing content based on things that interest you in the real world. For example, if there is a pair of shoes or a jacket or a chair that you really like, Lens could help you find similar goods shared by other Pinterest users, including businesses that sell such items.

Pinterest is one of a number of technology companies using computer vision and image recognition techniques to help consumers find things to buy. Many apps use reverse image search, such as Shutterstock, Snaplay, ImageBrief, and TinEye, while Google has offered a handy reverse image search tool for a while. Facebook, too, has been pushing the boundaries in terms of improving computers’ understanding of the content within images.

As with anything that falls under the broader machine learning umbrella, Pinterest says that Lens will improve over time — it needs access to more imagery and user input. That’s why it will remain a beta product for now, but given that it’s open to everyone in the U.S. now, this should go some way toward improving its engine. Users can tap a little “+” button, which is new to the latest release, to add feedback.