When Flickr co-founder Caterina Fake announced her new travel-note app Pinwheel earlier this month, the folks over at photo-sharing app Pinweel (no “h”) weren’t happy. In fact, the company even asked that she “cease any further or intended use of the name.”

Pinweel has revealed exclusively to VentureBeat that Fake (pictured) has now expressed interest in acquiring the company’s trademark rights for Pinweel, which could indicate potential worry on her part.

“Ms. Fake has responded to our letter notifying her of our trademark rights,” Pinweel said in a statement. “In her response she expressed an interest in possibly acquiring our rights to the Pinweel mark. We’ve since responded to Ms.Fake, explaining that we have no interest in selling any rights to our name. Our focus right now is on continuing to improve Pinweel in order to provide the Pinweel community with the easiest and most satisfying way to collaboratively share photos.”

Pinweel, a photo-sharing app for the iOS, was launched in the Apple App Store on Feb. 14, 2012, but it filed for the Pinweel trademark in March 2011. The company made the its first notable appearance at TechCrunch Disrupt NYC back in May 2011, and its goal is to help people create photo albums and share them with friends and family.

Fake’s Pinwheel application is in now private beta. She has described it as a way to “leave notes all over the world.” Notes left on top of locations can be public, private, or shared, and available to one person or to an entire group. Users can organize their notes into sets, making travelogues or journal entries. The company is backed by $2 million in funding, which was led by Redpoint Ventures. The trademark for “Pinwheel” appears to be held by the company and was filed for on Dec. 31, 2011.

If Pinweel took Fake to court over the name “Pinwheel,” it’s unclear what the outcome would be, according to Jefferson F. Scher, Partner at Silicon Valley-based Carr & Ferrell. Scher told us that if there is a high degree of customer confusion, you can make the case that the name “Pinwheel” will hurt the trademarked “Pinweel.”

“With two different apps co-existing on the same device, there’s an argument that there could be confusion,” Scher said. “But if they are different enough in what they do, it may not be a problem.”

Fake did not respond to a request for comment. We will let you know if she gets back to us.

Finally, here’s a glimpse of “Pinweel”:

And here’s a look at “Pinwheel”: 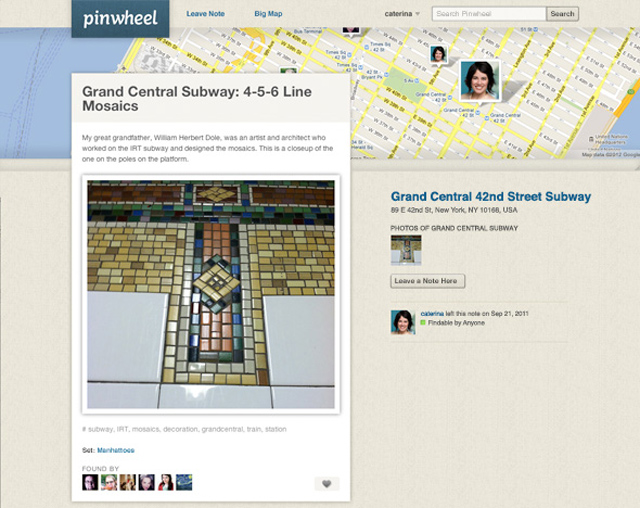