In our review one year ago, VentureBeat called the Pixel “the best Android phone money can buy.” The Pixel 2, unveiled two weeks ago, boasts some marked improvements over its predecessor: among them a better camera, visual searches, and on-the-spot translation of 40 languages. With these updates, Pixel smartphones remain serious contenders among flagship Android smartphones, albeit with limited distribution.

We’ll go over new features and draw comparisons between the Pixel 2, its predecessor, and other top-of-market smartphones, but here’s the TL;DR: 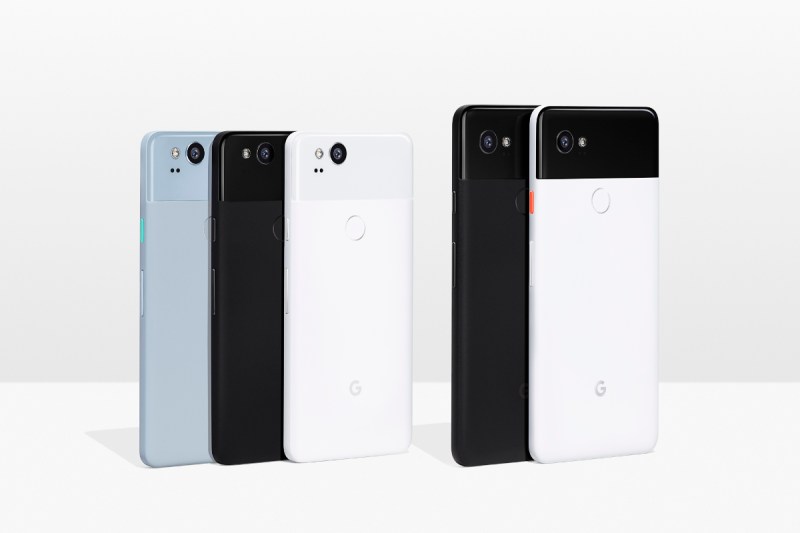 Above: Pixel 2 and Pixel 2 XL phones

Though the Pixel 2 and Pixel 2 XL offer some hardware improvements compared to their predecessors, it’s largely software — led by Google Lens and Google Assistant — that differentiates the Pixel 2 from other Android phones.

Lens is Google’s service for computer vision and later, when it becomes available with Google Assistant, will be used for a live augmented reality with computer vision experience.

Overall, Lens in Google Photos is fun. Though it may vary in accuracy, it offers an experience that is not yet natively available in other smartphones.

Lens can easily pull phone numbers from billboards or websites from flyers with surprising accuracy, even when URLs are small and hard for the human eye to read. This is likely the result of the well-trained machine learning Google uses for things like translation.

While it might lead to a cluttered camera roll, taking a picture of the side of a bus and doing a Lens search is often faster than typing in a URL. 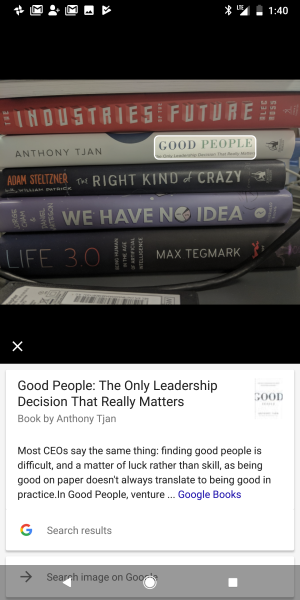 Lens can also recognize works of art — like music, books, or video games — as well as landmarks. Lens does, however, get a bit confused when presented with multiple works of art, like a series of books.

Results for this stack of books, for example, toggles between two titles — Life 3.0 and Good People — when there are actually five. 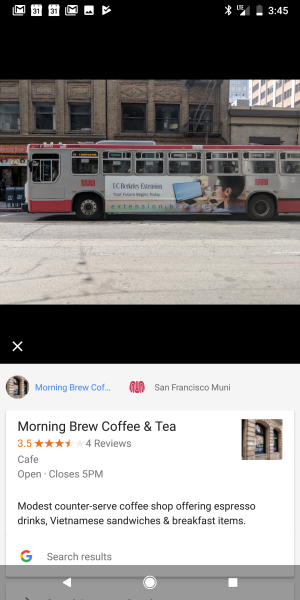 This photo is another good example of the feature’s shortcomings. There’s an ad for UC Berkeley extension on the side of a bus, Morning Brew Coffee & Tea in the background (on the left), and a San Francisco Muni bus logo. Among the three, Lens can’t seem to decide which to highlight.

In tests by VentureBeat, Lens recognizes California Street, where cable car trolleys often run, but struggles to identify landmarks. After repeated attempts, Lens failed to identify the most recognizable landmarks in San Francisco, from the Transamerica Pyramid to the Golden Gate Bridge and Salesforce Tower. In fairness, Salesforce Tower is still being built, but it’s going to be the tallest building on the west coast of the United States, and it has, well, towered over the city for about a year. 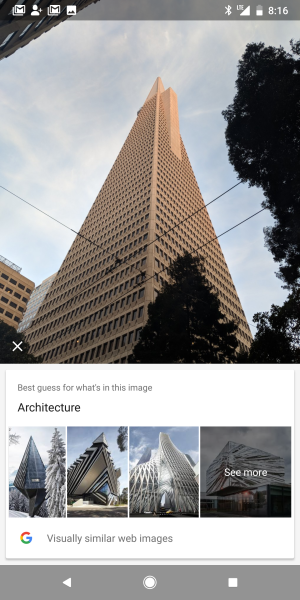 It’s odd that the new Pixel phones can’t recognize San Francisco landmarks, since they were unveiled in the heart of San Francisco, and virtually every tech screenshot you’ve ever seen features tests in San Francisco.

Until Lens gets better at identifying multiple objects, user can try to zoom in and select a specific portion of a photo for Lens to scan.

Google’s biggest hardware event of the year ushered in more than a dozen updates for Google Assistant, like a male voice, apps for kids, and other new features. Most of these are available for Google Assistant users on all Android devices, though some are exclusive to the Pixel 2, like music identification.

Google calls this music feature Now Playing, but if you were dreaming of a phone that catalogs every single song playing within earshot, think again. Now Playing can only capture one song at a time, meaning each time a new song is captured, the old song is forgotten. The only way to save a song is to bring it up in Google Assistant.

When a song is identified, it will appear on your Lock screen and in your Notifications drawer. To open it in Google Assistant, double tap the notification on your Lock screen or tap the notification, and you’ll be shown song lyrics, artist, album, year of release, and other information, depending on the artist or song. You’ll also be given options to listen to the song on YouTube or Spotify, or to purchase the song from Google Play.

In its ambition to help people identify songs, Google Assistant joins Alexa, which recently became part of the Amazon Music app, and Siri, which also identifies songs and has a personal DJ function for iOS 11.

For now, this isn’t a Shazam-killer, as Now Playing doesn’t offer a list of the songs it’s identified.

Now Playing also has some ground to make up when it comes to other identifiers, as it seems to have difficulty recognizing certain songs. In tests for this review, the Pixel 2 had trouble recognizing songs from Macklemore, Justin Bieber, and other artists currently on Spotify’s Global Top 50 pop songs.

Pixel 2 was also unable to perform effortless recognition of Too Many Zooz’ “Warriors,” a funky song with a lot of brass that Google uses in one of its main TV commercials. Now Playing could, however, identify the song if you picked up your phone, opened Google Assistant, and asked “What song is this?”

Google’s new Pixel Buds will be able to deliver Google Assistant notifications and, exclusively for Pixel phones, carry out the kind of on-the-spot translation that wowed a lot of people when the earbuds made their debut alongside the Pixel 2 on October 4.

Google has not yet made Pixel Buds available for purchase or review, but remember, the Google Assistant already has the power to translate more than 100 languages, many of which can be pronounced by Google Assistant. So even without Pixel Buds you can ask: “How do I say ‘I need to get to the nearest hospital immediately’ in Portuguese?”

The Pixel 2 camera received a DxOMark score of 98, surpassing the iPhone 8 Plus and Samsung Galaxy Note 8, which both received scores of 94 and which both feature two rear cameras. By comparison, the original Pixel by Google received a score of 90.

DxOMark bases its rating on things like autofocus, dynamic range, performance in bright light, zoom, color definition, and other features. 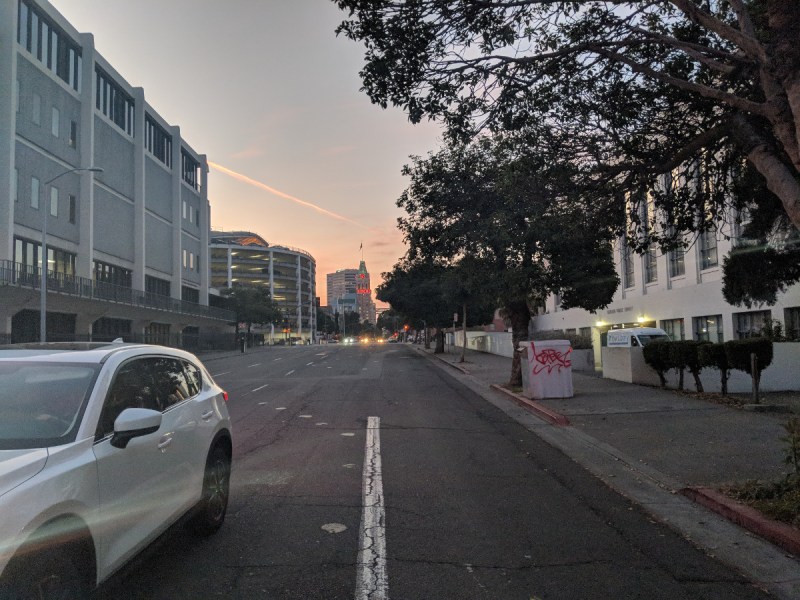 Above: 13th Street in downtown Oakland at dusk.

The Pixel 2 brags in its “Questioning” commercial that the Pixel can “see at night.” That’s overselling it, but the Pixel 2 can capture some pretty cool low-noise shots at night. 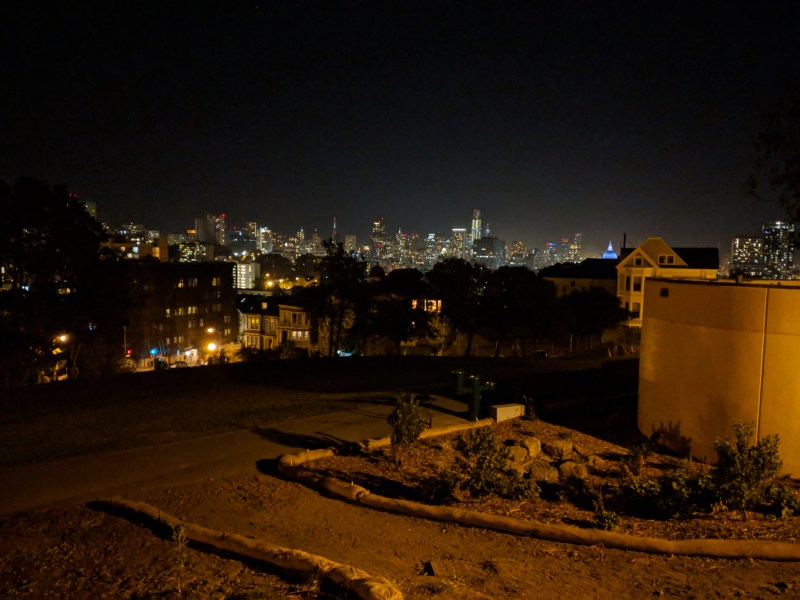 Above: Standing in Dolores Park looking toward the San Francisco skyline.

Also new with the Pixel 2 is Motion mode, or 3-second videos shot after a photo is taken. This feature is similar to Apple’s Live Photos.

Just like with the original Pixel, Pixel 2 owners get unlimited space for photo and video storage via Google Photos.

One new hardware feature that comes with the Pixel 2 and Pixel 2 XL phones is the ability to summon Google Assistant or silence the phone just by squeezing it.

The squeeze feature can be adjusted based on your grip strength, meaning it can be made easy whether you have a firm grip or a soft one.

Changing the settings for Google Assistant can have negative results, though. Make it too loose and the squeeze setting can go off when you’re doing simple things like picking up the phone or trying to slip it into a pants pocket. If you’re somebody who likes listening to music, these interruptions can get annoying.

Another major hardware difference between the original Pixel and the Pixel 2: The Pixel 2s have no headphone jack.

If you have an iPhone 7 or iPhone 8, you know about that dongle lifestyle and its drawbacks. Unless you get wireless headphones, if you insist on sticking to the old headphone jack there will be pain points.

The Pixel dongle is also a bit larger than the iPhone dongle. This might mean you lose it less often, but it also means you may have a noticeable dongle bulge in your pants (chuckle).

Years from now, wireless headphones may be the norm, but if you’re like most people still using the old headphone jack, you may have a tough time, especially if you lose that adapter. Perhaps forecasting this eventuality, Google dropped the price for USB Type-C dongles to $9 last week.

There’s a lot to like about the new Pixel 2s, from their illustrious screens to the sexiest camera on the planet to the exclusive features at launch.

But as experiences with Lens and Now Playing make clear, the Pixel 2s’ biggest advantages are still very much works in progress.

If you want the latest and greatest, definitely give the Pixel 2 and Pixel 2 XL a shot, but if you’ve got the original Pixel or Pixel XL and are happy with it, you may as well stick with that for now.