Touchjet’s TouchPico is a tiny handheld projector that runs Android and lets you interact with the projected image using a special stylus. Think of it like a giant Android tablet — except that you can display it on any flat surface.

The TouchPico made its debut at Eureka Park, the startup portion of the International CES, with a demo that drew crowds as I was walking by.

To truly get a sense of what Touchjet is offering, check out my chat with chief marketing officer Slava Solonitsyn below. He showed off the technology running on another one of Touchjet’s products, a tiny Android box that can attach to a portable projector:

The technology clearly isn’t as responsive as a traditional touchscreen, but it’s still fast enough for basic games and app navigation. The key to Touchjet’s technology is its stylus, which emits infra-red signals that the projector recognizes. Solonitsyn sees Touchjet’s tech replacing interactive whiteboards in classrooms, but it could also be ideal for families. For example, instead of letting your child play Angry Birds solo, you can make it a group event.

Touchjet plans to launch a Kickstarter for the TouchPico soon, and it will eventually retail for around $500 (early adopters will get a slightly cheaper price). The unnamed accessory for existing projector owners will retail for around $150. 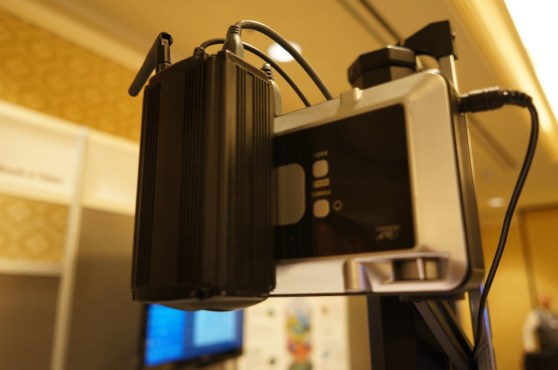