While Pocket Gems is a game developer, its Episode platform is more like a storytelling app. Episode is a comic-book style mobile app that allows fans to choose story paths in interactive tales. It is particularly popular with women and girls, and San Francisco-based Pocket Gems has had great success with other entertainment tie-ins that appeal to the same demographics.

So far, more than 4 billion episodes have been viewed across 73,000 stories that have been posted on the Episode app. The company says that makes Episode the “world’s biggest mobile storytelling network.” The Pitch Perfect movies, meanwhile, have generated $400 million at the box office.

Previous brand tie-ins for Episode include Pretty Little Liars and Mean Girls. Those partnerships have helped Episode grow its ranks of fans to its interactive mobile platform. Universal, meanwhile, will run a contest in the app where the winners will get access to the “VIP Experience” at the Universal Studios Hollywood theme park. With such promotions, Universal can help the Episode app stand out. The next movie debuts on December 22.

“It’s cool that after five years of Pitch Perfect being around, people are still eager for more ways to interact with the movie and the Bellas,” said Anna Kendrick, the star of the Pitch Perfect movies, in a statement. “A new story on Episode gives people another way to enter the world of Pitch Perfect. Plus, it seemed like this whole smartphone trend wasn’t going anywhere anytime soon, so I thought I’d try and get in on the action.” 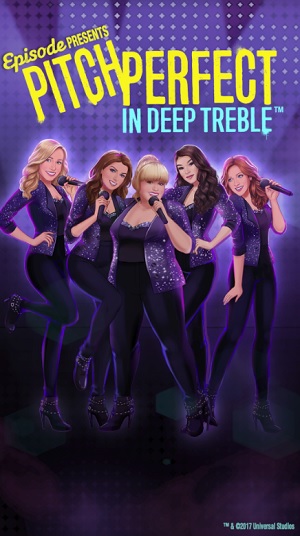 Above: Pitch Perfect: In Deep Treble is a new interactive story on Episode.

Pocket Gems crafted an animated story with an original plot, Pitch Perfect: In Deep Treble, based on the characters from the films. In this story, the audience can choose the direction the story will lead. App users can create their own stories and post them on Episode. The network lets viewers insert themselves into popular entertainment titles like Mean Girls, Pretty Little Liars, and now Pitch Perfect. Pocket Gems launched Episode in 2014.

In the Episode story, the Barton Bellas a capella group will have to square off against the rival Treblemakers for the right to stay as the sole a capella group at the university. Players will have to compete alongside their favorite characters to keep the Bellas together.