Pocket is rolling out a handful of updates today as the Mozilla-owned app reminds users that it’s more than a simple read-it-later service.

Indeed, Pocket is probably better known as a service that lets you bookmark articles from your phone or desktop to read offline at your convenience. But the company rebranded from Read it Later way back in 2012 for good reason: It doesn’t want to be limited to words, seeking instead to be associated with all manner of content — from videos to images and beyond.

Regular users will know that Pocket has offered a “Listen” function for a while — you hit the little headphone button at the top of the screen and a voice reads out your pocketed articles in order. But this text-to-speech functionality leaves a lot to be desired — for starters, the voice is a little too robotic and not entirely pleasing to the ear. Moving forward, however, those using Pocket on Android and iOS devices will experience human-like dulcet tones, thanks to an integration with the Amazon Polly text-to-speech service.

The new Pocket also ushers in a bunch of interface upgrades to make it more audio-centric, though these vary depending on whether you use Android or iOS.

Before now, on Android you would hit the little Listen icon at the top of the screen and a small control panel would pop up at the bottom, allowing you to play, pause, and skip articles. Now a new “enhanced player” takes listening to a full-screen view, with more granular controls, such as a scrubber that lets you drag the audio to a specific point of your choosing.

On iOS, the Listen button was even more hidden, plus you didn’t have the ability to line your articles up to listen to them continuously, like you did on Android. As of this update, the Pocket iOS app has been brought in line with the Android incarnation. 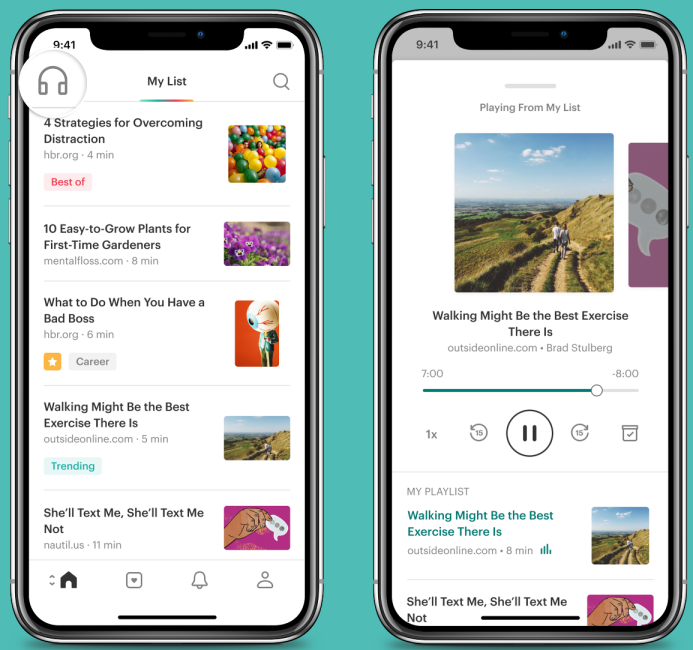 Above: The new Pocket app for iOS is all about listening

Additionally, the Listen button is now more prominently visible in both the article list area and within the individual article itself — before, you would have had to open the menu when in the article to access Listen mode.

Finally, it’s worth noting that there is now an Alexa skill that lets you listen to your Pocket articles through Alexa-enabled devices, such as the Amazon Echo.

In summary, Pocket is mimicking some of the best features of a podcasting app, except that rather than having a professional broadcaster speak to you, Amazon’s Polly reads you all your favorite bookmarked articles from across the web. This actually feeds into a broader trend — podcasting is getting huge. A recent Edison Research report into podcast listening trends indicated that 26 percent of people in the U.S. now listen to at least one podcast each month, up two percentage points from 2017, and they now listen to an average of seven podcasts each week — up from five last year.

This trend has led to some big venture capital investments in the podcasting realm, while technology companies such as Apple and Google are also increasingly investing in the medium. All this activity goes some way toward explaining the direction Pocket is moving in.

“Your Pocket list just became your own personal podcast, curated by you,” Pocket CEO Nate Weiner said. “Our new Listen feature frees the content you’ve saved to fit into your busy life. It enables you to absorb articles whenever and wherever, whether you are driving or walking, working out, cooking, or on the train.”

The latest update isn’t just about listening to articles, however. A bunch of new user interface (UI) updates rolling out across Pocket’s platforms are designed to improve the overall read-it-later experience, including new fonts, spacing, margins, colors, icons, and more to make reading longer articles a little bit easier. 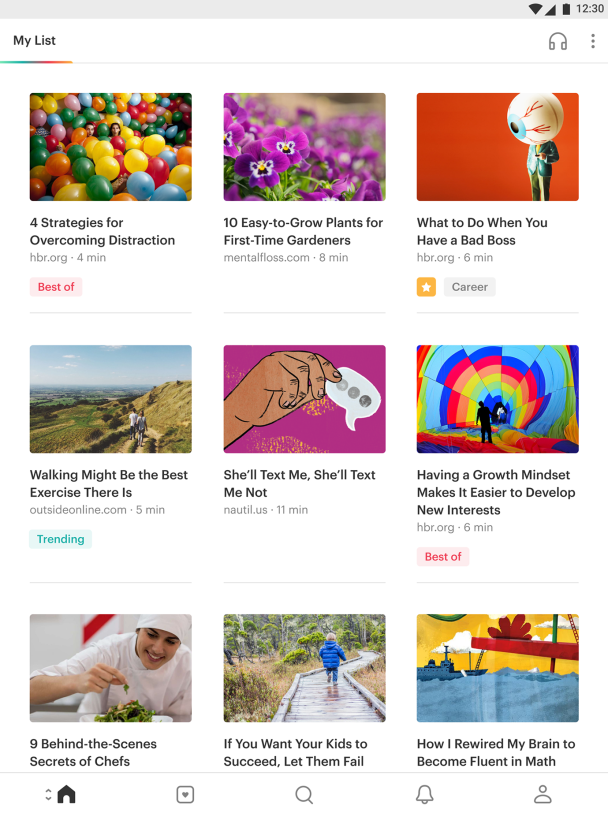 There are also new article filters, quick-swipe actions, and bulk editing features, in addition to a new dark theme for nighttime reading.

While Mozilla has supported Pocket natively within Firefox for a while, last February the internet giant went all-in and bought Pocket outright. Mozilla is already leveraging its acquisition and recently revealed it was bringing sponsored stories from Pocket to new tabs in Firefox. With this latest update, it’s clear Mozilla isn’t about to let Pocket grow stagnant.

“At Mozilla, what we love about the web is the ability to freely discover new topics and ideas, outside of the influence of platforms over which you have no control,” added Firefox’s chief product officer, Mark Mayo. “Pocket’s update adds to Mozilla’s experimentation with content discovery by making it even easier to enjoy great content when you’re on the go, in your own focused and uncluttered space.”