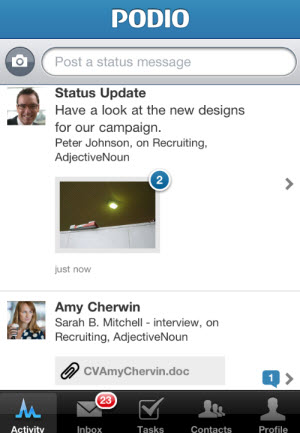 Consumer have been eagerly downloading apps for their smartphones and tablets. Now business apps for mobile devices are gaining popularity.

Podio is launching what it calls the world’s first business app store and business app builder to help people at work create productivity apps with no need for technical expertise. The approach is a good example of how company’s can try to snare users by making it dead simple for them to create what they want themselves, as part of a “creator economy.”

The Copenhagen-based company will sell its Podio App Builder, which allows people to create custom work apps for business processes from recruiting to expense reporting. Users can build those apps within a matter of minutes. Podio is also unveiling its Podio App Store today with more than 200 business applications available for free.

Podio launched last fall in Europe in a private beta test and has more than 20,000 users among 8,000 organizations. They’re using it as a collaborative work tool at places such as Greenpeace, InMobi and Rebate Networks. The user-made apps can be created for any project, business unit, or company. The user simply creates a space, invites contacts, and begins adding and customizing the apps needed. Podio automatically enables features such as document sharing, active streams, task management, contacts, multi-lingual support, reporting and calendars.

Podio combines actions from all of the apps into a single user interface that’s easy to manage. Users have already developed more than 2,000 apps on their own. Those apps can run on the iPhone or Android mobile devices. Language support includes English, Danish, French, Spanish, and German. 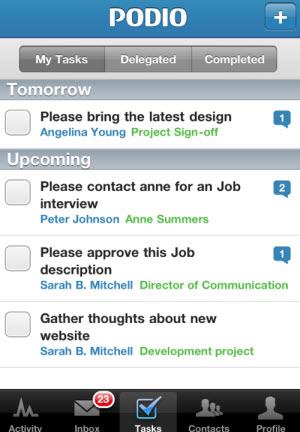 The Podio app can replace multiple apps from others, such as Yammer, Box.net, and Sharepoint, said Amit Gupta, vice president of development at InMobi, a mobile ad network. Podio costs $99 a month and can be used by up to 25 users. A free version is available for up to 10 users.

Podio has opened up a physical store in San Francisco where it will work with users to help them create their own apps. The company has raised $4 million in funding from Sunstone Capital, in addition to an earlier angel round.

The company’s chief executive is Tommy Ahlers, and it has around 15 people.

“The key point here is that a user-created environment is much easier for people to work in,” Ahlers said in an interview. “We feel like we are putting all of these different web apps together.”