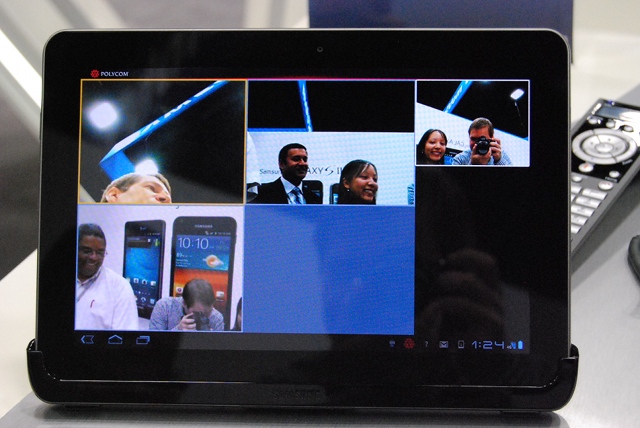 Several startups and major companies such as Polycom, Cisco and Citrix, are heavily expanding the reach and power of video conferencing solutions. With a more mobile workforce and increasing numbers of telecommuters, video conferencing abilities for enterprise and mid-size companies are becoming even more valuable and necessary.

I was able to see the Android application in action on a Samsung Galaxy Tab 10.1 on the floor at CTIA Enterprise 2011. At least when it came to seeing the app on Android in a controlled demo, the solution worked well.

Polycom’s video conferencing apps allow an employee to dial into a meeting while on the go and see up to 12 concurrent video streams, including their own. A person using a tablet to call into Polycom’s system will be able to hear more than 350 callers on the line as well.

Surendra Arora, Polycom’s VP of business development, emphasized that Polycom’s video conferencing was now interoperable and the only video app that allows for HD video transmission using the back-facing camera on tablets that support it. (Of course, you’d most likely use the front-facing camera so you can see the conference.)

“The solution is device and OS agnostic,” Arora said. “And the fact that you can use your own device like an iPad or Motorola Xoom, unlike Cisco’s dedicated hardware, makes video conferencing more accessible.”

Arora hinted that the company’s next move would be to bring video conferencing solutions to smartphones. However, he declined to give a timetable for when we could expect to see iPhone and Android phone versions of the Polycom tablet apps.