Looks like sell-your-own-fashion app Poshmark has been keeping some big-name celebrity investors tucked away in its pocket.

Unlike your startup, Poshmark didn’t want to yell names like major fashion icon and reality star Rachel Zoe; Madonna manager Guy Oseary; or actor and investor Ashton Kutcher (who all contributed to Poshmark’s second round of funding) from the roof tops. Because that’s just cheesy, and Poshmark wanted to prove itself outside the fame.

“We wanted to build our marketplace organically without the public help of celebrity investors,” Poshmark chief executive Manish Chandra told VentureBeat. “The timing of announcing celebrity investors is a big question startups should ask themselves.”

Poshmark’s app lets its mostly female userbase set up shops to sell clothing, accessories, and shoes. People can buy from these shops at any time, but Poshmark sets up special, daily “Posh Parties,” or themed virtual-selling events. The company then takes a cut of the transaction. Some women have made over $100,000 selling through the app and have started Poshmark-based businesses. 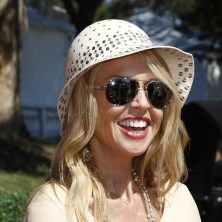 Above: Rachel Zoe — can we talk about how cute she and Kutcher look with their matching bucket hats and sunglasses?

The company suspects that over $350 million worth of inventory will be uploaded to the app by the end of the year, though it won’t give out specifics on how much has been sold or revenue figures.

This weekend in Las Vegas, Poshmark will hold its first “Poshfest,” a weekend-long event to encourage its community. Rachel Zoe will introduce herself as an investor to the community at that time through a special video.

Chandra sees Poshfest as a turning point for his company. Up until now he has spent energy on getting his users addicted to an app that really does give back. But with the celebrity endorsements out there, Poshmark may soon earn more celebrity of its own.

“We plan to build a significant independent company,” Chandra said after we asked if he had plans to take the company to an initial public offering.

Other investors that had previously been kept under wraps include AngelList founder Naval Ravikant, Shervin Pishevar, and Ron Burkle. Previously only Mayfield Fund, SoftTech VC, Menlo Ventures, SV Angel, and Inventus Capital had been revealed.