We’re seeing the biggest change in how we interact with computers in years. And it’ll mean much less input from you.

Apps like Google Now, Tempo AI, and others represent the first wave of “predictive technology.” These are apps and services that are smart enough to fetch information for you — before you realize you even need it.

These apps are powered by cloud computing, the proliferation of smartphones, and ubiquitous mobile broadband.

(VentureBeat will be discussing how all of these mobile technologies converge at our invite-only Mobile Summit next month.)

We’ve certainly come a long way from the command prompt.

But while much has been made of Google Now and its ilk, there’s still plenty we don’t yet know about where it’s all headed. How much personal data are we willing to give up for the convenience of prediction? And could an over-reliance on predictive data actually get in the way of information we really need?

Tim Tuttle, founder and CEO of Expect Labs, thinks that the technology will quickly leap out of our pockets and into a wide range of devices.

“Over the next few years you are going to see predictive tech and intelligent assistants begin to appear everywhere,” Tuttle told me via email. “Not only will they be in most apps you use — they will also be in your car, in your living room, and in your office. They will also be inside the enterprise — helping doctors better treat patients, helping customer support reps more quickly assist their customers, helping a mobile workforce coordinate in the field, etc.”

It’s worth noting just how closely that trajectory matches other predictions for the next few years — in particular, the rise of wearables. The key to predictive technology is data; and sensor-laden wearables, which by their very definition are physically attached to us, will be a goldmine of useful information.

Wearable fitness trackers from companies like Fitbit and Jawbone already use their data in a predictive fashion. The Jawbone Up, for example, tracks your typical sleep patterns and can alert you when it notices a potentially problematic trend. If you’re burning the midnight oil several nights in a row, your Up may recommend that you find time for a nap during the day.

The further convergence of predictive technologies and next-generation wearables isn’t far off. Google’s rumored smartwatch will reportedly center entirely on Google Now, which seems like a far more compelling offering than anything existing smartwatches offer.

While it functions similar to a digital assistant like Siri, Google Now is more focused on predictive search. So instead of just alerting you to incoming calls and texts, a Google Now-powered smartwatch could display directions to your next meeting or suggest a nearby restaurant you may like — without you even needing to ask.

Tuttle’s company has developed a predictive platform for the video conferencing app MindMeld. With this app, Expect Labs has created a whole new approach to video chat — and it’s something that portends the next wave of predictive innovation.

MindMeld lets you conduct group video chats like Skype and Google Hangouts, but it also “listens” to your conversations to bring up relevant details. If you’re chatting about an upcoming trip to New York City, for example, MindMeld will bring up tourist details and other information specific to your trip (it’s even smart enough to find things around your hotel, if you mention it).

Here’s a a demo of an early version of MindMeld at our office:

“While we are still a long way off from building the omniscient Star Trek computer, the technology is getting better at a surprisingly fast rate,” Tuttle said. “It will start with special-purpose intelligent assistants that let you easily find information you need in specific domains. For example, if you work in sales support, you will likely rely on an intelligent assistant that understands your entire product catalog.”

We’ll likely see plenty more predictive-focused products and services soon. Google Now has been a big success on Android; there are a slew of “smart” calendar apps out there trying to make sense of your schedule; and a recent Forrester report pointed out that predictive apps are “the next big thing.”

Before launching MindMeld, Tuttle tells me his company saw a massive interest in its platform from big companies. While he couldn’t go into many specifics, it’s worth noting that MindMeld’s investors include Samsung and Intel. 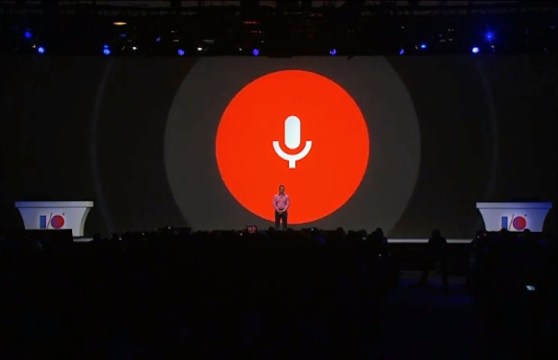 The downsides of a predictive future

While the rise of smarter predictive apps sounds practically utopian, there’s plenty to worry about as well. After all, do we really want to give up significant amounts of our decision-making to algorithms?

MoveOn.org founder Eli Pariser describes the dangers of our over-reliance on algorithms in his book The Filter Bubble. Companies like Google and Facebook are getting increasingly better about showing us things they think we like, but Pariser tells Brain Pickings, “It’s also a real problem: The set of things we’re likely to click on (sex, gossip, things that are highly personally relevant) isn’t the same as the set of things we need to know.”

We’re not going to stop companies from trying to predict what consumers want — but hopefully we can come up with ways to predict more intelligently. And most importantly, we need to do so without losing essential elements of our humanity.

“Thanks to smartphones or Google Glass, we can now be pinged whenever we are about to do something stupid, unhealthy, or unsound,” technology critic Evgeny Morozov wrote in Technology Review. “We wouldn’t necessarily need to know why the action would be wrong: The system’s algorithms do the moral calculus on their own. Citizens take on the role of information machines that feed the techno-bureaucratic complex with our data. And why wouldn’t we, if we are promised slimmer waistlines, cleaner air, or longer (and safer) lives in return?”

A more concrete worry is the data we’re giving up to companies for predictive services. Imagine, for example, a service like MindMeld that doesn’t just listen in when you’re Skyping but listens to you all day — to every conversation you have online and off — to anticipate your every need.

We’re not there yet — it would require huge leaps in battery technology, for one. And given the amount of criticism new technologies like Google Glass have received, we’ll probably have some serious discussions about how an “always listening” app could work while maintaining your privacy as well as the privacy of those you talk to.

Today, we’re concerned about how companies are using our location data and communications metadata. In the future, we’ll have to watch out for how companies use practically everything we say and do.

Joaquin Phoenix in the AI love story “Her.” Annapurna Pictures.

Ultimately, true anticipatory computing will likely lead to fully artificially intelligent apps and services. The world of Spike Jonze’s Her, with its A.I.-driven operating systems, isn’t too far off.

But just as you trust a real-life personal assistant with countless personal details, all of that information will be held by the companies offering these A.I. services. Google has slowly edged its way into our lives, starting with search, then Gmail, and now Android — so it wouldn’t be hard to imagine a Google-powered A.I. as your future virtual assistant.

Imagine never having to sort through your inbox again, having an immaculate record of your finances always available, and getting perfectly curated playlists for a party based on the preferences of who’s attending. The benefits of an A.I. assistant will be hard to resist.

But at this point, it’s clear we still have a lot to learn as a society before we can even consider the place of A.I. and advanced predictive services in our lives.