3D printing is sexy, exciting, and the new new thing. 3D printing software, on the other hand, is a usability disaster that can make the Maker Faire dream a configuration and interoperability nightmare.

In other words, the 3D printing industry is like any other brand-new industry: immature.

But perhaps not for long.

“3D printing has a horrible user experience right now,” PrintToPeer cofounder Tom Bielecki told me last night. “It’s super difficult, and you have to use three different types of software just to get your file into the printer.”

Above: Giant companies are moving into 3D printing. Here’s a Mitsubishi priter. #CES2014

That includes multiple pieces of software to prepare the 3D file for printing and a separate piece of software just to deliver the final file to the printer via USB, Bielecki’s cofounder, Kaz Walker, told me.

Tiny three-person startup PrintToPeer is building software to fix that problem. In fact, it’s a set of applications for scheduling, user management, memory management, and networking that 3D printer owners can call via a single API. It’s all delivered via a custom Linux distribution the company will ship on a Raspberry Pi.

Already, Bielecki says, the company’s software can print to more than 80 percent of the 500-plus types of 3D printers on the market. Soon, he hopes, that number will grow to 100 percent.

Companies who want to build 3D-printing-as-a-service businesses have a huge problem with the different operating systems and file-input software options. If they have multiple machines — as anyone who is adding new printers to an existing portfolio would — they are dealing with non-scalable problems when trying to flow print jobs through a single process.

Bielecki’s vision is to enable organizations like that to simply print to a single API, abstracting away all the complexities of their various printers’ varying software and workflows. That will enable a sort of Amazon Web Services of 3D printing, he says. 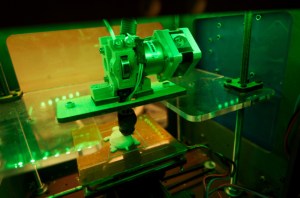 Above: A 3D printer making a turtle

PrintToPeer was founded in Calgary, Alberta, and is currently going through the GrowLab accelerator in Vancouver. The company has been bootstrapped for a year and is currently seeking a round of investment, but Bielecki is also planning for a Kickstarter campaign next month.

Not for the cash, however.

“Our Kickstarter isn’t really for money,” he explains. “Rather, it’s to attract core groups of evangelists. That will get developers interested, and that will bring in the OEMs.”

In other words, he wants to get the attention of those who are building 3D printers right now … and possibly get them to build PrintToPeer’s API right into their machines. And, ensure that they build networking into their printers — one of PrintToPeer’s side jobs to date has been retrofitting networking capability into legacy 3D printers.

That, of course, would be a significant win in PeerToPeer’s big vision to be that single API that will enable all 3D printing.

One thing that will be music to 3D printing geeks’ ears: It is steering clear of all DRM. Most hardware hackers are also software hackers, to a greater or lesser degree, and DRM is not something they want to see.

“DRM has failed in every other industry that has used it,” Walker says. “Why would we include it here?”