Countless tech startups break out in a given year. The majority fail. Of the ones that don’t, some are boring, some are copycats, and some are worth mentioning, but not necessarily highlighting. Just one startup stood out to me in 2017: Eve-Tech.

To be clear, Eve-Tech was founded back in December 2013 (see this timeline). But the Finnish startup only launched and started shipping its groundbreaking device, the Eve V, this year.

Eve V is described as the world’s first crowd-developed computer. I’m sure there’s another company that will argue and want to claim the title, but Eve-Tech has pulled off the feat successfully. The Eve V is a 2-in-1 detachable convertible (it can be used as a tablet and a laptop) meant to compete with Microsoft’s Surface Pro.

And it does. If you’re not looking for the most powerful device in its class (the specs in all of Microsoft’s Surface devices can be upgraded to the max, for a price) but rather are interested in “bang for buck,” then the Eve V nails it.

But Eve-Tech is not interesting because it managed to create a competitive device. That’s been done before and will be done again. Chinese startups in particular have become very good at building devices that outclass the competition at a lower price.

No, Eve-Tech is interesting because of the crowdsourcing aspect. Crowdfunding a new gadget is one thing, but crowdsourcing every specification? That’s something else. The Eve V was designed by 1,000 community members whose names are listed on the inside flap of every Eve V box. 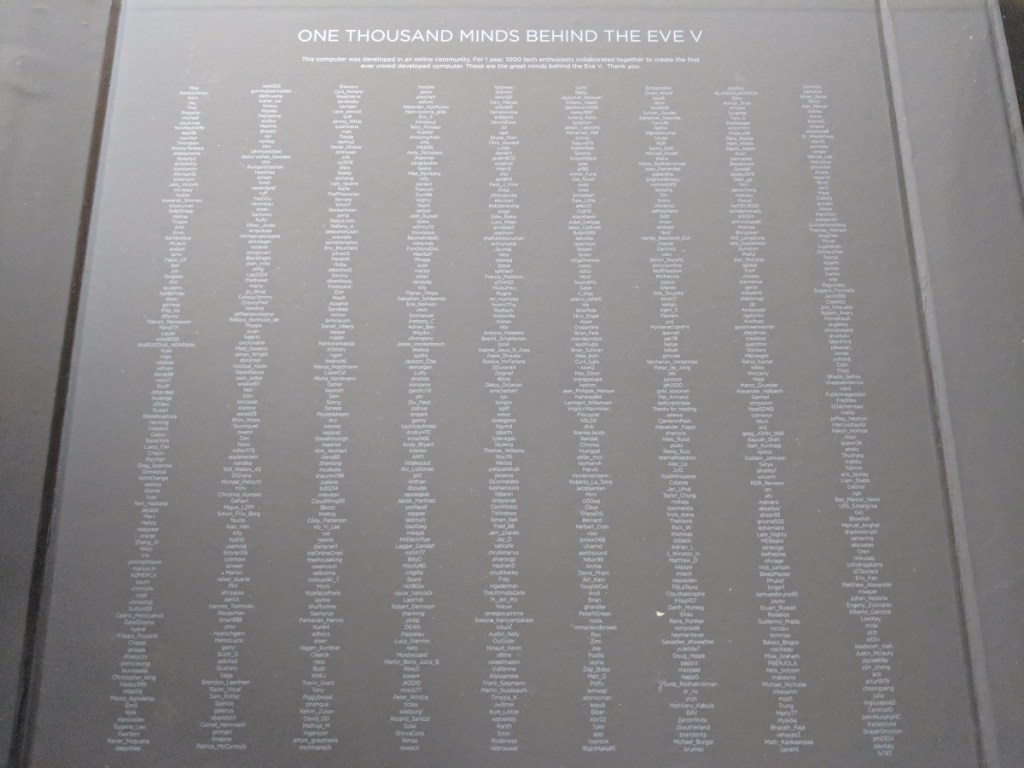 Also, the Eve V doesn’t ship with any bloatware, just like Surface devices but unlike every other Windows 10 computer. This is a device you may actually want, as opposed to one you settle for.

The Eve V includes a few nice hardware touches. There’s a built-in fingerprint scanner, which is slowly becoming more common on laptops. The keyboard has seven backlight colors, which you can easily switch between using Fn+V. Oh, and the keyboard isn’t just detachable — you can use it wirelessly over Bluetooth. Tired of laptops with a single USB port? The Eve V thankfully has two.

That said, the Eve V certainly isn’t perfect. In fact, it has a few obvious drawbacks: the bezels are noticeably thick and the backspace button is stupidly labeled “oops!”.

Another example: Eve V is terrible for gaming. The community chose battery life over including a proper GPU. That said, the team encourages gamers to connect an eGPU via the Thunderbolt 3 port for those times when you do need the extra juice.

You can’t please everyone.

I, for example, don’t want a Surface Pro replacement. I want a 15-inch desktop replacement. Someone else wants the lightest laptop on the market while yet another wants the most powerful. And so on and so on.

But this is exactly why Eve-Tech is worth watching. Eve V isn’t a device that tries to please everyone — it’s a device that lets its community pick the compromises.

The big question is whether Eve-Tech will be a one-hit wonder. How many more devices does it make sense to build? How frequently will the original Eve V get updates, and how regularly can new customers expect a spec bump? When does it make sense to refresh what exists and when do you start from scratch?

Eve-Tech’s community has a lot more to decide.