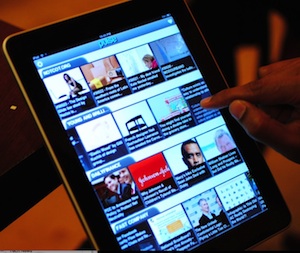 The Pulse News Reader, an iPad application that was highlighted on-stage at Apple’s Worldwide Developer Conference yesterday by Apple chief executive Steve Jobs, was removed last night from Apple’s App Store. (It has since returned, and you can download it here — more on that in a moment.) The app’s disappearance was prompted by objections from The New York Times, which sent VentureBeat an email with more details about the company’s complaints.

The Times’ objection was embarrassing for Apple, and it was criticized by tech pundits like Techdirt’s Mike Masnick, who said the company seemed to be “confused about its own RSS feed,” which allows users of programs like Google Reader to read the headlines and summaries (but not the full text) of the latest Times articles without visiting the nytimes.com site.

So is The Times just freaking out because someone is republishing its RSS feed? Diane McNulty, The Times’ executive director of media relations, told us that the Pulse app goes further than that:

Furthermore, when a user clicks on a story in the News Pulse Reader, it takes them to the nytimes.com site, which is framed within the News Pulse Reader app browser, as opposed to taking them directly to our site. (Since our RSS is not full text, once a user of any of our RSS feeds views the RSS headline/summary of any of our articles, a user can click a button in the app labeled “Web” & this opens our web site up but keeps the user within the App.) This is a violation of the nytimes.com Terms of Use.

Finally, they are using the Times name/content to promote their app, particularly because the Times RSS feed comes preloaded on the App and we are featured in their demonstration video: http://www.alphonsolabs.com/video.

Pulse was created by Ashay Kothari and Ankit Gupta, two students at the Stanford Institute of Design.

So why has the app returned? McNulty told us she doesn’t know yet, while another spokesperson told Times reporter Brad Stone, “We think it has been reinstated by error.” Apple hasn’t commented. And Kothari told TechCrunch, “We’re trying to figure that out ourselves.”