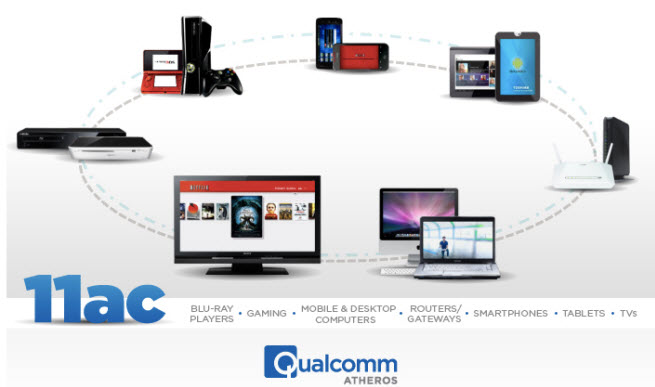 Qualcomm Atheros expects that the next-generation of WiFi wireless networking will roll out in a smoother manner than past industry transitions and with less confusion for consumers.

Rob Chandhok, Qualcomm president of internet services and senior vice president, said in an interview that the 802.11ac technology will likely see a simultaneous rollout for both access point chips as well as end-use devices. The first wireless networking 802.11ac chip sets are expected to debut late this year or early next year, depending on when the engineering standard is finalized by an industry consortium. This time, there has been less squabbling around the standard among industry players, Chandhok said.

“The adoption is going to be much faster once it’s ready,” Chandhok said. “We’re going to drive this into the market.”

In the past, companies have fought over the standards and they have also rolled out access point chips first before getting device-side chips out into the market.

In advance of next week’s Mobile World Congress show in Barcelona, Qualcomm Atheros, a division of Qualcomm in San Diego, Calif., is launching its ecosystem support around 802.11ac technology. The company believes its 802.11ac chips will be used for home and office networking, smartphones, tablets, PCs, laptops, televisions, home routers, gateways and enterprise access points.

With the faster technology, users can sling video from a central hub to a screen in a distant bedroom. They can synch a lot of music or video files wirelessly, and surf the internet without killing the battery life of the device they’re using. The full transition to WiFi chips with 1.3 gigabit-per-second speeds will likely take place within the next two years.

Qualcomm has already created one chip, the WCN3680, that will be able to combine 802.11ac technology with standard WiFi, Bluetooth and FM radios on a single chip as a companion to Qualcomm’s 28-nanometer Snapdragon processors. The device will likely have firmware upgrades that capture the final engineering standard and make sure the device is compliant, Chandhok said. A bunch of other chips will be ready for different applications. Qualcomm Atheros will sample its 802.11ac chips in the second quarter. But consumers won’t see them in devices until late this year or early next year.